I’ve seen a glimpse of the future if my husband should retire early, and it isn’t pretty. I think France was definitely on the right track when they recently raised their retirement age. Two grumpy old people living in the same house at the same time is not healthy. Men live longer if they continue to work and feel useful—which in turn keeps women out of prison for murder. It’s a win/win situation.
Recently my husband had his wrist broken in a motorcycle accident. He had to have a few adjustments, such as surgically implanting some nuts and bolts or something, like Frankenstein, only in the wrist and not the neck. But even though he had one perfectly good arm, he still thought I should help him dry off after he took a shower. (Really? As if! I’m not a nurse and I don’t do sponge baths.) He had to take a few days off work anyway, so he shouldn’t have been in such a hurry. Apparently he’s never heard of “drip dry.” Besides, when I had Lasik eye surgery, did I ask him to watch television for me? I don’t think so.
I walk the dogs in the woods everyday and sometimes, though I seriously try to avoid them if I can, I pass this elderly couple taking their daily stroll. The man usually carries a stick to fend off dogs or hapless children, and the woman carries a permanent frown on her face. It must be very heavy. They both seem rather angry at the world in general, and never greet me or respond to my hello. They hate dogs and made that known to me the first time I saw them. Now they just stare at my two little neutered pets as though they’re children of Cujo and hold their stick at the ready. I imagine their unhappiness stems from the man’s early retirement.
Have you ever noticed how men so readily fall into that helpless role, when they retire and are home all the time? Honey, where are my glasses? Honey, could you get me a drink? Honey, I can’t find my shoes. Honey, the batteries in the remote are dead. Honey, did you hide the keys to the car? (Of course I did. You’re legally blind.)
Another strange phenomenon I’ve noticed is that older men tend to get a bit weepy. Not my man of course. I definitely won’t allow it when that time comes. But “other” men. Sometimes it works out for them. Women think they’re suddenly being sensitive to their feelings or something, when really they just can’t stop. The testosterone is running dry and their tear ducts are swamped. 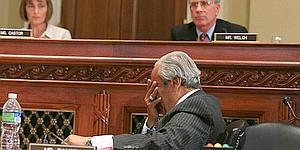 Charlie Rangel is a perfect example of this. He knew the ol’ tear ducts were his best bet to get off with a slap on the hand for his crimes, so he let’em have it full force. He never said he was sorry for cheating and lying, but he did look really sad that they maliciously accused him. He apologized to the committee for any embarrassment he may have caused them by having to go through this charade of a trial against a completely innocent man who never did anything intentionally wrong, but may have “accidentally” forgotten to pay taxes for seventeen years on his house in the Dominican Republic. The Democrat term for this is “Good faith mistakes.” The way he acted, I’d call him a pathological liar or a perfect candidate for an Alzheimer study. Either way, they should have kicked his butt out of the House! After all, he actually is way past retirement age. Let his wife deal with him.