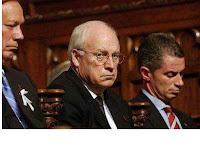 I read an article recently about a survey taken of Americans to determine their rate of happiness. After the polls were taken and the answers were in, the happiest Americans were old, male, and Republican.

For all of you young, female Democrats, it is a sad day to realize you are not happy—or at least not as happy as Dick Cheney. Although, I can’t say he looks all that happy outwardly, but perhaps he holds it all inside. Some people are like that. They portray the exact opposite of what they truly feel. Take comedians for example. Oftentimes, they are the most unhappy individuals of all, taken to suicidal tendencies and chronic depression. It could be the Democrat in them, but sometimes they’re old and male too. Wouldn’t those happy genes counteract the unhappy political views? I don’t know.

I think we should take the time to analyze this. Scientifically speaking (not biology or chemistry, cause I wasn’t any good at those), but with an open mind. The kind of open mind that’s used when supposedly smart people make up theories on the beginning of time and all. Open your minds really wide and I will fill it up with my theories of true happiness and how to get it.

Back in the “olden” days there was a Great Depression. Not like today. Obama’s great depression is nothing compared with the original. I know this because I have a grandmother.

Now, let’s take the senior citizen side of things…

If someone lived through the Great Depression or their parents did, they would be changed by the experience. Their outlook on things would be different than you or I, because in comparison everything would look rosy. They would be happier and content with what they have. You don’t wish for a new car or bicycle or computer when you’re old because without a license, balance, or technological savvy, you have no need for those things. Washing dishes by hand, paying for things with cash, discussing the weather and if it may rain or not, eating high-fiber to maintain regularity, are the simple things that now bring contentment.

As for the happiness that comes from being male…

I think that since they are old as well as male, they have been working at a regular job or career for approximately fifty years of their lives. Now they are retired and able to be home much more, spend time with their wives, watch endless sports on television, and become adept at keeping an eye on the neighbor’s lack of lawn care. This carefree existence makes them happy.

Their wives, on the other hand, are accustomed to being alone, taking care of the house, living a quiet life since the children are grown and moved away, and only having to prepare a meal at the end of the day when hubby returns from his job, but…now everything is topsy-turvy. The television is on twenty-four hours a day even when no one is watching it. He wants to graze in the kitchen five minutes after she cleans up. The neighbors call the police and report an old man lurking around their yard, measuring the length of their grass and taking pictures. This is stressful on the female and she is now unhappy.

As for the Republican part…

When you are on the “right” side of issues, you are naturally happier than when you’re on the wrong side and calling names just cause you don’t have a sensible argument.

The survey also said that married people are happier than unmarried, church-goers happier than non-believers, and those that give to charity or church are happier than those that horde it all for themselves. Which, by the way, are also things in a recent survey that Republicans did much more than Democrats.

So there you have it. A few not-so-secret secrets to happiness.

Personally, I’m just going to have to live with two out of three – because as a Republican and church-goer, I don’t go in for none of that sex-change stuff.