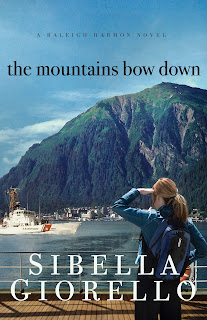 About The Mountains Bow Down: Everything’s going to work out. Time away always makes things better . . ..

That’s what FBI Special Agent Raleigh Harmon believes as she boards a cruise to Alaska. A land of mountains and gems and minerals, The Last Frontier is a dream destination for this forensic geologist who’s hoping to leave behind a hectic work schedule and an engagement drained of romance.

But when a passenger goes missing and winds up dead, Raleigh’s vacation suddenly gets lost at sea. The ship’s security chief tries to rule the death a suicide, but Raleigh’s forensics background points to a much darker conclusion: Somewhere onboard, a ruthless murderer walks free.

Engulfed by one of her toughest cases yet, Raleigh requests assistance from the FBI and receives her nemesis-perpetual ladies man Special Agent Jack Stephanson. As the cruise ship sails through the Inside Passage, Raleigh has five days to solve a high-profile murder, provide consultation for a movie filming onboard, and figure out her increasingly complicated feelings for Jack-who might not be such a jerk after all.

And that’s only her work life. Family offers even more challenges. Joined on the cruise by her mother and aunt, Raleigh watches helplessly as disturbing rifts splinter her family.

Like the scenery that surrounds the cruise ship, Raleigh discovers a situation so steep and so complex that even the mountains might bow down.


About Sibella: Sibella Giorello grew up in Alaska and majored in geology at Mount Holyoke College. After riding a motorcycle across the country, she worked as a features writer for the Richmond Times-Dispatch. Her stories have won state and national awards, including two nominations for the Pulitzer Prize. She now lives in Washington state with her husband and sons. Find out more about Sibella and her other books at her website. www.sibellagiorello.com

My Review:
I have read all of the Raleigh Harmon novels and in my opinion they just get better and better. This fourth one in the series was so good I didn’t want it to end, but although it is the longest book so far, I knew that Raleigh had to eventually solve the case and get off that cruise ship.
Raleigh and her mother are along for the ride on a cruise with her Aunt Charlotte and Charlotte’s crazy psychic friend, who just happens to grate on Raleigh’s last nerve every time she’s in the room. Raleigh has taken a job as a consultant for a Hollywood movie, and plans to do some rock hunting and hiking on her “sort of vacation.” But as you’d expect, someone ends up dying and Raleigh is pulled into solving the murder before the cruise ends and all the suspects get away.
Raleigh is newly engaged, but still unsure of her feelings for the southern gentleman back home, even ignoring his calls and using work as a buffer against dealing with the truth. Her mother is mentally fragile and with all that is going on, Raleigh is not able to keep an eye on her like she normally would, shielding her with lies and evasion to the point that she doesn’t like herself very much.
Jack, an FBI agent from her past, flies in to help her with the case, further confusing her feelings about marriage to her fiancé, DeMott.
The Mountains Bow Down is a murder mystery on a cruise ship with self-obsessed Hollywood characters, laugh-out-loud humor, and beautiful descriptions of Alaska and the ocean that will make you want to take your own cruise there, but it also has an emotional depth that sneaks up and pulls at you like a riptide. The character development is awesome to behold, facets of Raleigh’s character revealed in the smallest of nuance. Whether tender scenes with her mother, or repartee with Jack–the agent she wants to dislike, we learn a little more about Raleigh and what makes her tick.
(Disclaimer: I was given a copy of this book in exchange for an honest review.)
Start the series fresh with this great deal! Pick up a copy of Book 1 for your Kindle or Nook for only $2.99! The Stones Roll Away is the critically acclaimed award winner that kicked off the Raleigh Harmon series.

Sibella’s celebrating the release of The Mountains Bow Down by giving away a Cruise prize pack worth over $500.00!

One Grand Prize winner will receive:
A $500 gift certificate toward the cruise of their choice from Vacations To Go.
The entire set of the Raleigh Harmon series.

Go here! ENTER Then tell your friends – the giveaway ends on 4/1! The winner will be announced at Sibella’s Raleigh Harmon BOOK CLUB PARTY on FB April 5th, 2011! Don’t miss the fun – prizes, books and gab!

About the Facebook Party: Join Sibella and fans of the Raleigh Harmon series on April 5th at 5:00 pm PST (6 MST, 7 CST & 8 EST) for a Facebook Book Club Party. Sibella will be giving away some fun prizes, testing your trivia skills and hosting a book chat about the Raleigh Harmon books. Please RSVP  and if you have questions you’d like to chat about – leave them on the Event page.