Someone once said, “you can’t teach an old dog new tricks.” According to the Dog Whisperer, you actually can, but teaching old people new tricks…that’s a whole other program.
After about fifteen years with a cordless phone, I still find myself standing directly in front of the wall where the old phone once hung, as though tethered by the ghost of phone calls past. When I suddenly realize I have no reason to stand there to talk, I walk nonchalantly around the house for the rest of the conversation, but then return to the wall as I’m getting ready to hang up. Why? I have no idea, but the invisibility rule applies to my cell phone as well. 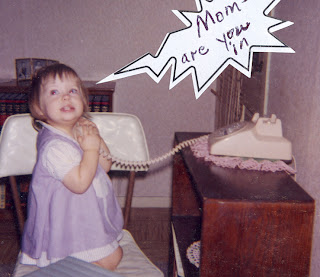 I bought a cordless mouse for my computer because my shoulder was suffering from the awkward position I apparently held it in as I clicked away, surfing the web. But my brain still doesn’t believe. An invisible cord controls the position of my mouse and how far it can move. No matter that my shoulder muscles have become tied in knots even a sailor couldn’t figure out, I still can’t seem to move the darn thing to the other side of my desk for longer than a few seconds before unconsciously moving it back. I guess that’s why it’s called a “magic mouse.”
So I’ve decided to use this Inability to Change Disorder, for my own good.
Now when I need more exercise I just rearrange my cupboards. Put the plates where the bowls once were, glassware where baking dishes once sat, pots and pans in the cupboard where Tupperware should be. Before you know it, I’m opening and slamming cupboard doors, my blood pressure is rising, my heartbeat quickens, and I feel those endorphins screaming to get out just like when I exercise on the Nordic track.
I moved the garbage can under the kitchen sink from the left side to the right side about four years ago. For at least two of those years, every time I wanted to throw away a Kleenex, I had to open both doors before I found the darn thing. That is twice as much arm movement in a day than necessary, but it all counts. Just like those 5000 steps a day we’re supposed to take to be “healthy.” I probably get around 2500 cupboard door slams a day. That definitely adds to my healthy status.
I don’t think anyone has written a How-to housekeeping/exercise book quite like this. My idea could blow the “tighter arms in ten days for Dummies” publishing market right out of the water. I’m going to get right on that as soon as I finish my other novel. Maybe. Although—writing a how-to book might be a little too much change even for me.