She’s kicking off the release of her new novel. 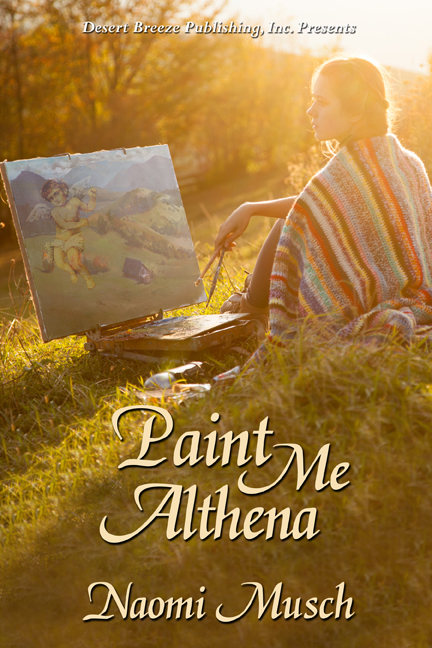 When still life artist Ethan Day discovers a fantasy painting by Althena Bell in a consignment shop, he’s sure he’s found Ava, his wife who abandoned him and their two little girls three years ago. Finding and rescuing her are one thing, but forgiveness and second chances are impeded by outsiders, and conflict between Ava’s search for identity and Ethan’s new faith might break the safety net he offers.

She needed to get away, but there was no place to go. She leaned forward, longing to hug her friend but, conscious of her wet clothes, she pulled back. “I’m sorry. I shouldn’t have come here.”

She turned for the door. Anguish flooded her even as the rain let up outside. Light brightened the window to a gentle gray.

“Thena!” Ann pleaded, but Ava hurried to the door. She flung it open and rushed outside — and smack into a man’s chest.

“Oh!” She stepped back. “I’m sorry.” Gushing her apology, she moved to pass around him, but he didn’t budge.

She hadn’t heard her name spoken aloud in three years, and now it sounded like her subconscious come to life. She looked up and swooned. Ethan grasped her shoulders as the bag dropped from them. She blinked. “Please… please… I have to go.”

She nodded, her glance grazing up the street and down again. “Yes. Please.”

She reached for her bag but he swooped down and picked it up. The rain had gone from shower to sprinkle, but he allowed her to hurry them down the walk.

“This way.” He pointed at a small sedan. “It’s not locked.” He tossed her bag into the back seat as she climbed into the passenger side.

He glanced back at the shop and nodded. “There’s room. I’ll get it.”

She gnawed her lip. Any moment now, Dan would come around the corner. Maybe on his cycle, maybe in his truck. The car jerked as Ethan opened the trunk and lifted the bike inside. He couldn’t close it tight, but pushed it down as far as it would go. He opened the door and ducked in beside her, tucking his long legs into the car. She inwardly urged him to hurry. A moment later he turned the key and the motor purred to life. “Which way?” he asked as he pulled from the curb.

She shook her head. There was no answer.

You’ve said that the idea for Paint Me Althena came to you in an unusual way. How did that happen?

You know how you sometimes have a dream that seems really exciting, but when you wake up it doesn’t make any sense? Well, I had a dream about this story. It was one of those like-watching-a-movie kind of dreams, and it was fraught with tension and romance. A scene of a young woman fleeing a Victorian to get away from someone she cared about but feared — that especially got my heart beating. When I woke up, I thought, “Wow, that was some dream.” I expected it to fragment apart at any moment, but as I thought about, I realized it made sense. It wasn’t the jumbled mess that most dreams seem to wind up being. It had a beginning, a middle, and an end — a real plot. So I grabbed a notebook and started writing the synopsis. I’d never dreamed a story from beginning to end like that before. Of course I had to flesh out a lot of the details, but it sure gave me an instant overview.

That’s some dream! I wonder what you had on your mind that made you dream such a story.

I think I’ve figured that out, and it actually became the main theme of the book. It seemed I’d been made aware of several women, some young, some older, who were thinking of leaving their families. I think my dream materialized out of my mind trying to process why they’d do such a thing. Ava, the protagonist in Paint Me Althena, ran away from her husband and children and lived for three years under the alias Althena Bell. (She has a reason for the unusual name she chose.) In my story, she had to come back and want a fresh start, but that would be quite a hurdle to overcome for both her and her estranged husband, not to mention her children’s feelings.

Plus, Ava/Althena still had to be likeable. I think it works. I think readers will really care about Ava and understand her.

Can I ask why she did abandon her family?

She had self-image issues mostly, which is another theme that found its way into the story. She didn’t feel she deserved the life she had — or rather — she was made to feel that way by one of the antagonists in the story.

What about Ava’s husband? He must have felt greatly wronged. Will readers care about him?

Oh, he did feel wronged, and readers might rightly wonder why Ava would ever leave him. He’s a great dad in the early stages of a growing career as a fine artist, not to mention he’s — ahem — quite good looking. At least his young widow friend Jackie recognizes all those traits…

Ah, I see. The plot thickens.

It does indeed. Thickened twice over, because another man has entered Ava’s life too, and he has no idea about her past, that she’s married, or that her name isn’t really Althena.

Usually. Readers might be familiar with Empire in Pine my 3-book romantic historical series. Paint Me Althena is my second contemporary. I like to focus on writing romantic women’s fiction in whatever way the story needs to be told. I like to tell stories that deal with the messes we make in our lives and the sorry outcomes that we sometimes have to deal with. But the main point is that God can clean them up if we’ll hand Him the mop. Does that mean everything always works out for everyone in my books? No, because characters, like real people, sometimes have to live with certain consequences. But happy endings? Oh, yes. They have to be there, because I believe the very best stories always inspire hope.

Where can readers find Paint Me Althena or your other books?

Here are a few links and locations:

Enter the contest on NAOMI’S BLOG to

WIN an E-Copy of PAINT ME ALTHENA as well as an ARTISAN GIFT PACK.

Naomi writes from the pristine north woods of Wisconsin, where she and husband Jeff live as epically as God allows on a ramshackle farm near their five adult children and three grand-children. Amidst it, she writes about imperfect people who are finding hope and faith to overcome their struggles, whether the story venue is rich in American history, or along more contemporary lines.

Central to her stories is the belief that God blesses messes, and He delights in turning lives around. For that same reason, besides her fiction writing, Naomi spent five years on the editorial board of the EPA award-winning, Midwestern Christian newspaper, Living Stones News, writing true accounts of changed lives. While pursuing her fiction-writing endeavors, she spent a year as an editor with Port Yonder Press. She continues to enjoy writing for magazines and other non-fiction venues that encourage homeschooling families and young writers, and loves connecting with new friends via:

Thanks for stopping by and sharing your new book with us, Naomi!