Suspense is what’s for dinner this week on the Grace Award’s book launch!

OUT FOR BLOOD by Marcy Dyer

Dialysis nurse, Danielle Battershawn’s, life is turned upside down when her identical twin is murdered. As she strives to deal with yet another death, the killer sets his sights on eliminating her. Can handsome security consultant, Tyler Covington, keep her alive? 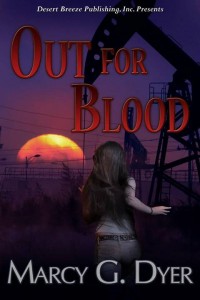 Under the cloak of darkness, the man donned latex gloves. He picked the lock on the back door to Janine’s house and tiptoed over the threshold. The soft fragrance of her perfume permeated the air. Such a shame. Inquisitive mongrel. They could’ve shared an exciting time together, but she had to play buttinski and stick her beak into his business, cutting short their love affair. Anger threatened to engulf him, but he shook it off and turned his attention to his search.

In the living room, he pulled books off the shelves, thumbed through them, and overturned the bookcases. He slashed furniture cushions and dug through the foam, then ripped up the corners of the carpeting. As small as the drive was, the witch could’ve hidden it anywhere. He pulled her antique glassware off the fireplace and broke them open. Empty.

After he pulled pictures off the walls and slashed open the backs, he moved on to the air vents. He unscrewed each one, stuck his hand inside the duct, and felt around.

Cursing, the man moved from room to room, dumping out contents of cabinets, drawers, the dresser, and desk. He turned over the furniture and checked the backsides and underneath.

In the bathroom, he checked under the cabinets and behind the mirror. Where did the conniving broad hide the flash drive? He slashed her bed to ribbons, dug through the stuffing, and pulled out handfuls of the cotton batting, but found nothing.

He slammed his fist through the drywall. “Stupid witch.” He composed himself and explored the entire house once again.

Slipping out the front door, he removed his latex gloves and stuffed them in his pocket. As he wove through the sprawling subdivision, he hummed the tune to “Death’s Head.”

Knowing Janine, she gave it to her sister for preservation. He would search Dani’s house and, after he had the drive, he’d dispose of her. Doing away with both of the meddlesome twins would solve two problems for him. He allowed himself a smile at the thought of carousing with Dani before he got rid of her.

Marcy G. Dyer is a Registered Nurse and suspense author. Like so many other writers, she began writing at a very young age, but never took herself seriously as a “real” writer until

about ten years ago when she began taking courses and learning the craft of writing.

She currently has two books available: Down & Out, and Out for Blood.

In addition to writing, Marcy is a freelance editor. She does editing for individuals, Desert Breeze Publishing, and Prism Book Group.