There is a lot going on in Port Scuttlebutt these days. Double Barrel Investigations is up and running, and Shelby’s dream to direct community theatre is closer than ever as the Port Playhouse is nearly complete, but a life-changing curveball throws both Blake and Shelby for a loop. Add to that the body of a man washed up on the bank of Lake Superior and you’ve got an unforgettable summer!

To celebrate the new release, I have discounted the first two

books in the series as well. This month you can pick up ROADKILL and MUCH ADO ABOUT MURDER for 40% off the regular price. Just $2.99 each!

While all the crazy people go shopping at the mall, you can relax in your easy chair with a cup of coffee, a piece of pie, and a good book. That’s where I’ll be.

Wishing you all a Happy Thanksgiving, and holiday season!

Thanks for stopping by! Leave a comment and say hi!

No, I’m not giving away dead squirrels or turtles that failed to get across the highway quick enough to avoid an early demise. That’s a completely different kind of road kill. 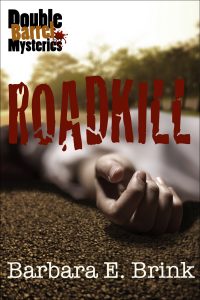 I’m giving away 5 signed copies of ROADKILL (Double Barrel Mysteries) book #1 at Goodreads! Starting May 6th, you can sign up for the giveaway at Goodreads and maybe you will be one of the lucky winners of an autographed paperback of ROADKILL.

You can use the link over in the sidebar>>>

If you’ve already read Roadkill, leave a comment and tell me what character you’re hoping

will make an appearance in book #2! Don’t forget to preorder MUCH ADO ABOUT MURDER! >

I know I keep saying that book 2 in the Double Barrel Mysteries is in the works and coming soon. And it is! But whipping up a murder, clues, suspects, and opportunity, setting it all in the quirky little town of Port Scuttlebutt, and writing entertaining dialogue for my married sleuths, Blake and Shelby Gunner, takes time and finesse and lots and lots of chocolate and licorice breaks.

But because I’ve made you wait much longer than I anticipated, and you must wait a bit longer yet, here is an excerpt from Double Barrel Mystery #2 (title yet to be determined) for your enjoyment!

Blake leaned over the sawhorse and braced one hand on the 2X4 he was cutting. The smell of pine floated on the air as the sharp-toothed handsaw steadily chewed through the wood, leaving a sprinkling of sawdust below. Sweat dripped from his brow and soaked his white t-shirt, making it cling to his chest like a second skin. A length of sawed off wood dropped to the ground and he straightened, a look of satisfaction in his blue eyes.

“Okay, I was wrong,” Shelby said, eyeing him with renewed respect. “You really do know your way around a construction site, babe. I never should have doubted you.”

“I told you I worked with a construction crew for six months before I became a cop.”

“Yeah, but I didn’t know you’d look so good in a tool belt you could sell chain saws to old ladies.” She shielded her eyes with one hand, looking up at the house. “Hey, isn’t that Tucker’s pickup in the driveway? I wonder what he’s doing here.”

“Probably came by to see Alice over his lunch break.”

Blake leaned the 2X4 against the sawhorse and slanted her a grin. “Maybe we can put him to work. The sooner we get these offices finished, the sooner we can take on clients and pay for the place. Double Barrel Investigations may have been your brain child, but I got to be truthful with you Shel… when it comes to wielding a hammer, you suck.”

“If that’s your idea of flattery, I’d hate to be on your bad side.”

“I haven’t got a bad side,” he said flexing his muscles.

She rolled her eyes, trying not to grin. “Who do you think you are, Fabio?”

He held out the newly sawn board.

She shook her head.

While Blake was busy pounding the 2X4 into place, Tucker stepped into the gutted boathouse. He gazed around with wide-eyed interest at the office area they were busy framing. The smack of the hammer echoed off the walls before Blake turned around with a welcoming grin.

“In time for what?” Tucker’s gaze narrowed.

“To help us out. As I recall, you’re an experienced drywall installer.”

“A part-time job for one summer doesn’t make me an expert.”

Blake shrugged. “Okay. You’re a wet-behind-the-ears drywall installer. But we could still use your help. At this rate, we won’t be done before the snow flies.”

The boathouse had been set on fire a month earlier, damaging the entire front wall, door, and part of the roof. Blake had torn down the charred wood, leaving the entrance open to the elements for now. They planned to keep the exterior as rustic as before, while updating the front section with insulated walls and flooring for the offices of their new business. Another door would lead to the rear of the boathouse and the lake beyond. There was still ample room to store a small sailboat there if they ever found spare money in their budget to purchase one.

Tucker slipped his hands in the front pockets of his oversized green hoodie and leaned nonchalantly on one hip. “I’ll do you one better. What if I could promise you free help from a real construction expert?”

“That has the definite twang of tight strings attached.”

Shelby gave Blake a playful swap on the backside. “Looking a gift horse in the mouth much?” She grinned at Tucker. “Don’t mind him. Suspicion always haunts the guilty mind. What’s your deal?”

“It’s not exactly my deal. Just think of me as your agent. I have a client for you who’d be willing to pay your fees in hard labor.”

“Wait a minute. A client? What are we investigating? A cheating spouse?” Blake’s brows pulled together.

“Hear him out, Gun. After all, beggars can’t be choosers. We need the help.”

“Fine. Who cheated on who?” he asked, slipping the hammer into the loop on his tool belt.

Tucker shook his head. “You got it all wrong. This is serious and right up your alley. Pete Dugan and my father go way back. They’ve been friends since high school. Dad wanted me to ask you if you would take on this case as a personal favor to him.”

Shelby sat on an overturned bucket. “What are we investigating?”

“Pete found a body buried on his property a couple days ago and now the police are treating him like their number one suspect. He thinks someone set him up and he needs you to help clear his name.”

“Looks that way. Bodies don’t usually bury themselves, do they?” Tucker asked with a straight face.

Blake stroked a hand over his jaw, eyes narrowed thoughtfully. Shelby knew he was intrigued and ready to take off in pursuit of a killer, happily leaving manual labor behind. She could see his wheels spinning already. He was still a cop at heart, despite his forced retirement last year after a shooting that left him with a bum leg and a burning desire to move back to his hometown.

“The police don’t usually jump to conclusions without good reason,” he said. “Who was the victim?”

Tucker cleared his throat and his gaze shifted to the partially framed wall. “Dugan’s ex-wife.”

Blake’s laughter was anything but mirthful. “You’ve got to be kidding me. A man’s ex-wife turns up buried on his property and you think it’s strange the police view him as a suspect? Nine times out of ten it’s the husband or boyfriend.”

“I know. I know. But my dad is certain Pete’s innocent and I had to ask.” He blew out a breath and slowly backed toward the dock. “Sorry to interrupt your work.”

“Hold on!” Shelby jumped up and ran to Tucker. Clasping his hand, she tugged him gently back. “Blake didn’t say no. He’s just stating facts. That doesn’t mean your father’s friend is a murderer. He may well be that one time out of ten. Right, Blake?” she said, shooting him a hard look.

He shrugged. “Sure. I’ll talk to him. But I can’t promise anything. If I think he’s guilty of murder, hell or high water won’t keep me from assisting the police in their case.”

“That’s fair.” Tucker gave a short nod and dug his pickup keys out of his pocket. “I’ll let Dad know.”

“Your dad was always good at seeing through lies and deception, Tuck.” Blake swiped sweat from his forehead with the edge of his shirt. “He certainly never fell for any of our wild stories. So it’s hard to believe he’d be a lifelong friend to a man capable of murder. I’m going to work this case on the assumption that Pete Dugan is an innocent man, because I trust your dad’s instincts.”

“What about the construction help?” Shelby reminded him. “If Blake and I are investigating the murder, someone has to be here to finish this.”

“Dugan was a construction foreman for over thirty years. He’s newly retired, but if he’s anything like my dad he’ll jump at the chance to get back into it.”

“So,” Shelby narrowed her gaze, “you haven’t actually discussed bartering labor in exchange for our services, have you?”

“Great!” Blake threw up his hands and huffed. “We’re back where we started.”

“Quit being a whiner, Acky Breaky. I got this covered. If Mr. Dugan chooses to pay you in cash rather than hard labor – which I can’t see happening – I promise to come back and help out as much as I can. I’ve got a new kid working part-time at the store now and he’d probably love some extra hours.”

“Thanks, Tuck,” Shelby gave him a hug and wasn’t surprised to feel ribs beneath his baggy sweatshirt. He definitely lived up to his nickname. He ate like a three hundred pound linebacker but never seemed to gain an ounce. “You should stop up at the house and have some of that raspberry pie Alice baked this morning. You are wasting away.”

“I thought you told me you were working out,” Blake said.

Tucker lifted a brow. “This is me in the best shape of my life. You can’t see it? I’m totally ripped. Alice says I’m buff.”

“Love looks not with the eyes, but with the mind,” Shelby teased.

His cell buzzed and he slipped it out to read the message. “What a coincidence. I’ve been invited for a slice of pie. Later, you two!”

You can purchase the 1st book in The Double Barrel Mysteries, ROADKILL, at these fine stores:  Amazon  Barnes&Noble  iTunes  Kobo  Smashwords

ps. ENTANGLED and CHOSEN are both still FREE at all online stores as well. Get your copies to read over the holidays!

Thanks for stopping! Leave a comment and tell me what you think about the excerpt!