Last week we took a trip to The Black Hills in South Dakota. Vacations can be relaxing, adventurous, or even educational. We prefer a mixture of the three. My husband normally gets up at 5:30 every day to exercise before work, so an extra hour or two of sleep in the mornings was a luxury. We also enjoyed hiking mountain trails and trying to get a selfie picture with a bear (Don’t worry. We never actually saw one). For the education part, quick stop-and-looks at points of interest along the highway (those plaques are loaded with historical information), made for a well-rounded vacation.

Some people might say we are boring, but they don’t know the extent of our adventures. One night we actually stayed in Deadwood at a cheap motel called the Bunkhouse. The windows didn’t lock and the walls were as thin as paper mache. Can anyone say, “Danger zone?”

After an exciting evening of eating pizza and listening to really bad karaoke at the nearby casino café, we turned in. On 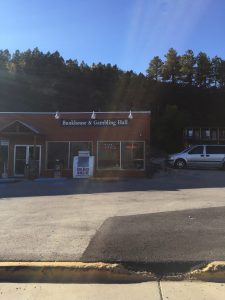 a bed so hard it would have been an improvement to add nails, I finally fell asleep around midnight. About an hour later, I was abruptly awakened by loud voices outside our open window. Lucky for us, someone had called the police…

The officer questioned the drunken suspect, (still unclear whether he was the victim or the perpetrator. According to him, he was attacked.) I may have missed the very beginning of the scuffle as I was in a Tylenol PM induced coma.

Officer: Why do you think he did that?

Drunk: Well, he lost some money at the casino and he was mad.

Officer: How much money did he lose?

Officer: Why was he mad at you?”

Officer: Why do you think he was trying to kill you?

Officer: How was he holding the broken bottle?

Officer: What did you think he was going to do with it?”

Officer: Is that when you pulled the knife?

Officer: Why do you think your brother wanted to kill you?

Drunk: Because he was mad!

Officer: Okay, now come over here. My partner needs to check you for weapons.

The officer basically repeats all the questions again with a little different wording, still right outside our window.

A woman’s voice in the background.

Officer: Did he hit you? Do you want to press charges?

Officer: Sir, go in your room and don’t come out again. I don’t want to come back here again tonight. Understand?

Comparative quiet… for about an hour and then…

A man speaking in a low ominous voice: So… did you win any money at the casino? How much?

Another hour or so of quiet and then… loud raucous voices laughing and cackling like a bevy of 1800’s saloon girls coming in to roost for the night.

I probably won’t ever stay at the Bunkhouse again, but I made sure to get my money’s worth. I took the tiny bar of soap and shampoo bottle even though I had brought my own.

Thanks for stopping! Leave a comment and tell us your most terrible, horrible vacation experience or just say hi!