The FALL BOOK BASH continues! November is already here and if you’re like me, you haven’t even begun to think about Christmas presents. Have I got some stocking stuffers for you!

Books, books, and more books! And what better way to find a great book than by reading a few excerpts. Pull up a chair and jump right in! Don’t forget to check out the last four Fall Book Bash blog post book excerpts as well.

Today, author Tammy A. Doherty is sharing an excerpt from her romantic/suspense novel, SHE’S MINE. This is the first book in Tammy’s new inspirational series, The Mystique of Naultag. Tammy also has an inspirational western series you should check out. (the 1st book is Free) You can find it here.

The note was taped to her front door, just as before. 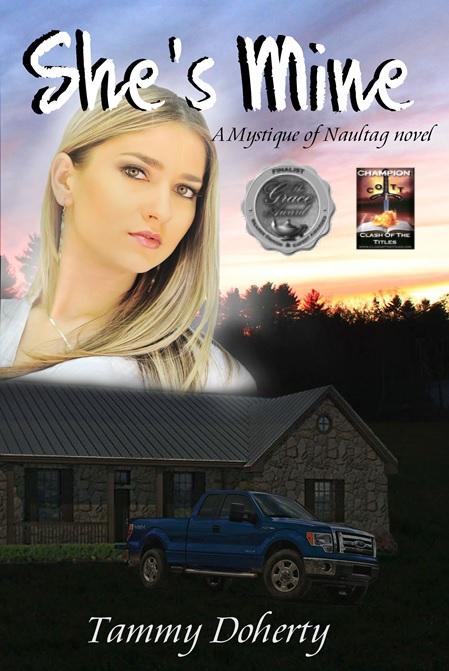 Remember where you belong. Jealousy enrages. No mercy will be shown when I take revenge. Fear sent an icy current down Caitlin’s spine, radiating out to her fingertips. She stepped back inside, locking the door.

No one was out there. Not now. Sometime during the night, while she slept unaware, the vicious note had been placed on the heavy wooden door, inside the screen door. Who hated her so much? Marci Coffey? Maybe, but Marci didn’t seem like the type to leave notes. She worked in more devious ways. Besides, Marci had no reason to be jealous.

Janelle, warning her to stay away from Scott? Twelve years of friendship and not one sign of jealousy. Until Saturday. Yet, Janelle hadn’t said she didn’t trust her. Caitlin had assumed the implication.

This note resembled the first one. Thick black marker, bold handwriting. The question of where she belonged.

Adam. “Stay with me Caitlin. We belong together.”

It hadn’t been her imagination playing tricks on Saturday. He was here. Why? She told him she wasn’t interested. Made it quite clear. And though he knew she was moving, she’d never told him to where. Had she?

Tears dripped onto the paper. Get a grip, Caitlin. Call Eric. He’ll know what to do. A police presence should scare off Adam. Just like in Lynn, when her roommate had called the police to complain about Adam sitting out front in his car, all night.

The trembling inside stilled as she looked up Eric’s number. He’d do something to help. She hesitated. What if Marci answered? Maybe Caitlin should call him at the police station since it was official business. Asking for Eric might start a rumor. If Marci found out, she’d have fuel for her anger, even if it was imagined fuel. Talking to someone else and saying she suspected Marci…wouldn’t that get Eric in trouble? Telling a complete stranger about Adam was out of the question. She hadn’t even been able to bring herself to talk with Janelle about the incident.

Caitlin set the cordless phone down on the desk. She couldn’t call anyone. Lord, how could you let this happen? I thought you’re supposed to watch over me and keep me safe?

Sean stared at the weather report on television. Eighty percent chance of rain today. Twenty percent chance of Caitlin wanting to see me again. Worse if she realized he’d followed her yesterday, even if it was only as far as the emergency room entrance.

Did the doctor prescribe something for her pain? He could call, offer to help change her bandage. What was the worst that could happen?

This was the worst. Caitlin stuck in his thoughts. She wasn’t the first woman he found attractive. Although, since breaking up with Melissa there hadn’t been anyone serious.

Beautiful, flawless Melissa. She wore her wealth with charm and grace, exuding sophistication. And she’d chosen Sean to be at her side. All he had to do was let Melissa mold him into her vision of perfection. She picked out his suits, introduced him to the right people, planned his future. She had painted an exquisite picture in his dreams. But that’s all it had been, a dream. When he had refused to turn the campground into house lots, her anger boiled over.

“Do you know how much that real estate is worth? I deserve that money.” Her face had bloomed red beneath layers of makeup as her voice rose. “After all I’ve done. You were just a dumb hick when we met. Now look at you. Mingling with the crème de la crème. Dining at the poshest restaurants. A position with one of the best firms on Wall Street. I made you who you are today. You owe me.”

Melissa used her father’s money and name to get what she wanted but it wasn’t enough. She needed a husband who could support her opulent way of life. She only saw him as a tool for maintaining her bank account. She was in love with his earning potential. And she was his stepping-stone. He’d been attracted to her family’s money. Her prestige. Her lifestyle. They used one another. The only difference, Melissa did it consciously. Sean had fooled himself into believing he was in love.

Why was he letting a woman monopolize his thoughts and dreams again?

Caitlin was beautiful, but it went beyond that. She didn’t flaunt her father’s wealth and fame. The farm could be sold off as building lots for a great deal of money. Instead, she’d moved into the house, keeping it in the family. She looked comfortable and at ease here in Naultag. Like she belonged.

She had backbone and nerve but got scared of imaginary monsters. She didn’t want anyone’s help, yet managed to get stuck in an unlocked basement. When she interacted with the Bartlett twins she’d let down the bristly facade. Warmth infused her voice, reflected in her eyes.

Who was crazier—a woman who sees imaginary monsters or the man who wanted to vanquish them for her?

Thanks for stopping! Have a question for Tammy or just want to say hi? Leave a comment!