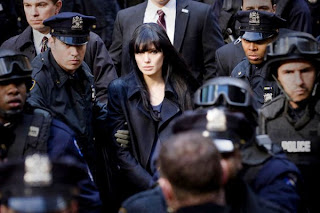 This week’s new spy film has slammed The Cold War down on a Bunsen burner.

Evelyn Salt—the character played by Angelina Jolie in the new movie, Salt—is my kind of woman. I think I’m in love. Not in that way! In the—“if I was a super spy and fifteen years younger, and could do one arm pull-ups, and wasn’t afraid of heights or jumping off moving Semi’s”—I would totally be her.

Jolie has proven once again that she is an awesome action star. Yes. I know movie stars have stunt doubles, but without that evil gleam in her eye, the action just wouldn’t be as exciting.

Tom Cruise is a pretty good action star, but he doesn’t have the gleam. He has a cute smile, but it doesn’t leave you wondering if he is a double agent. It doesn’t make you wonder if he really enjoys killing. You never doubt where his loyalties lie. (And I’m not talking about the weird cult of Scientology) His characters are always portrayed as true blue.

Jolie, on the other hand, gives off a twisted perception. You think she’s good at being bad, but is she just bad, pretending to be good? You are never quite sure.

Women the world over are supposed to hate her because she’s beautiful, (like the woman in the old Loreal commercial), or because she “stole” Brad Pitt, or because she is an expert knife-thrower. But I can’t seem to call up any such feelings about the woman. Partly because I’m pretty sure you can’t steal someone who isn’t willing and able, and partly because knife-throwing is such an enviable talent. Who knows when you’ll need to be able to hit a spider on the wall from thirty feet away?

Angelina is definitely beautiful, but I’m okay with that. If I were going to live in a fantasy world where I am a super spy, I’d certainly want to look like her and not Meryl Streep. Meryl is so “average” looking. Like most of us. Who fantasizes that they’re average? Besides, I just can’t see Meryl running through the streets at full-speed, jumping off an overpass onto a semi trailer going fifty miles an hour, or doing hand-to-hand combat with burly secret service agents.

Salt is Rambo without the grunts. She uses real words when necessary, in English and Russian.
Salt is Jason Bourne without memory loss. She remembers everything and uses it to her advantage.
Salt is John McClane without a wise-ass sense of humor. She kills bad guys faster because she doesn’t waste time cracking jokes.
Salt is Jack Bauer without a go bag. She uses whatever is within reach—chair legs, spider venom, handcuffs, her hard head, or a broken bottle.
If you haven’t seen Salt and you need an adrenaline rush this week, be sure and check it out. Better splurge on popcorn though, or you’ll be chewing your fingernails off like I did.