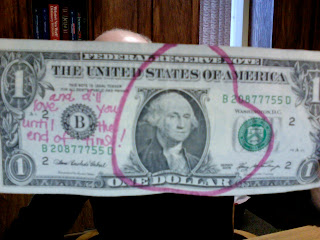 Romance is not dead in America. I know this because my husband received a dollar bill in change at McDonalds the other day that someone had written on in bright pink marker, “I’ll love you until the end of time.” (At least I hope it was given to him randomly and not purposely from some crazed, stalker woman who works at the drive-up window and has an eye for middle-aged, married, accountants.) He has been eating there a lot since the economy tanked—the dollar menu is a lifesaver for a man who refuses to carry a sack lunch.

Anyway, if you don’t live by the seashore, and have no opportunity to write a love note, stuff it in a bottle, and litter the ocean—defacing currency is another option to getting those romantic thoughts out on paper. In fact, it has a much better chance of being read than many newspapers. No one will line the bottom of a birdcage with dollar bills, soak up grease on a garage floor, or use them for washing windows. Newspapers don’t fare so well.

Just thought you might need some ideas for next month—being that it is the designated month for romance and love. Besides notes in bottles and writing on currency, here are a few more suggestions to liven up your love life and perhaps brighten the day of the one you love: