With all the depressing, angry news lately, I thought I’d share a little light-hearted story for your enjoyment. Happy Wednesday! Hope you all enjoy!

Queen for a Day

She was Miss South Dakota twenty years ago. The life-sized portrait in the sitting room was proof of that. In her silver and white gown and jeweled tiara she reigned over the small farmhouse with a $3000.00 orthodontic smile that put Marie Osmond to shame.

When she cruised down Main Street people still stared as she drove by in the red, Pontiac Firebird given to her when she won the state pageant. It was a little rusty around the doors now, but she had touched up the writing on the side so everyone could see it was Miss South Dakota’s car. She knew it excited them when she raised her hand and gave them her special wave. She enjoyed pleasing the little folks.

She said the two things she wanted most in life were world peace and to marry a pig farmer. Her love of pork had secured her the title of Mrs. Daryl B. Cimpl. She still needed to work on that peace thing, but she felt sure in time even that would be fulfilled. Besides, it was hard to believe that on their quiet little farm the world was not at peace.

She and Daryl had two wonderful twin boys, named after their father. She made sure they were educated in all the right areas. She taught them to tap dance by the time they were four. They would tap around the new pine floor of the barn while Daryl gave the baby piglets their shots and snipped off their tails, distracting the mother sows long enough for him to get out of the pen without a chunk missing from his rear-end.

When they were six she started them in organ lessons. They would never be in the marching band, but they would definitely be asked to play at all the weddings and funerals for miles around. That’s where the fame was. In South Dakota, folks congregated at family gatherings.

Daryl gave her everything he had promised, a home, kids, and all the pork she could freeze in a 24 Cubic foot freezer. He wasn’t much to look at, but she loved the man inside the thin, stooped, shell. His blonde hair was still boyish when he combed the long pieces across the top of his shiny pate, and the way he looked at her when she wore her tiara to bed could send her pulse racing. She had everything she ever wanted.

One day while dusting the frame of her portrait and watching General Hospital, she realized something was missing in her life. Somewhere along the way, she had lost her purpose.

She tried to pinpoint what it was she wanted. She loved her husband and sons, and taking care of their every little need. She loved helping out part-time at Black’s Funeral Home, where she applied makeup to the sunken eyes and withered cheeks of the deceased, making them appear 10 years younger or almost alive again. But these things weren’t a challenge to her talents, and that’s what she needed.

The new batch of baby pigs was born, shots were administered, tails were snipped, and Miss South Dakota had an idea. She picked the cutest, most perfect piglet of the litter and made it her protégé. She named her, Ambrosia.

Ambrosia was hand-fed with a bottle, while listening to classical music played on the organ by a Daryl Jr. Every evening she was bathed in ham-scented water and patted dry with a white terry-cloth towel. She was given a bed of pillows on the back porch where she lay with her hoofs pointed to the ceiling and her little snout wiggling as she dreamed piglet dreams. She was fed only the best corn, which she learned to eat from a silver doggy bowl. She was walked each day down the gravel road to the end of the section and back, eagerly pulling against the diamond-studded leash in anticipation of the meal that awaited her on their return.

Finally the day came for the family to pack up the truck with 400 lb Ambrosia in the back and head for the South Dakota State Fair. This was what being Miss South Dakota was all about, using the talents she had learned along the way by giving someone else a leg up; or a cloven hoof in this case.

The judges looked the pigs over, checking for flaws inside and out. Ambrosia stood docilely as they pulled on her ears and stuck their fingers in her mouth. She held her head high as she had been taught and kept that happy gleam in her eye. The judges were amazed by her posture, nodding to one another as they checked off their lists.

At one o’clock the ribbons were to be awarded. There was even a sign on the pig barn announcing that she, Miss South Dakota, would be attending the pig judging. It surprised her that they knew. She had only informed a couple dozen people that she would be there. When the judge slipped a blue ribbon over Ambrosia’s head and she gave an excited squeal of victory, Mrs. Daryl B. Simpl, Miss South Dakota 1985, cried tears of pure joy, even though it made the mascara run down her cheeks in rivulets.

As she led Ambrosia from the judging ring, she saw a crowd of people standing around a red car outside. On the door in large scrolled letters it said, Miss South Dakota 2006. She stopped and stared as a young, blonde woman stepped from the vehicle and turned to wave at her adoring fans. The blonde turned toward the barn and their eyes met, then her gaze dropped to Ambrosia.   Her smile froze in place and her eyes widened in shock. Ambrosia oinked a greeting as she took a pose, her jeweled tiara tilting crazily over her snout.

Thanks for stopping! Feel free to leave a comment below. 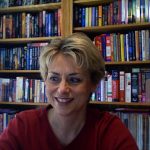