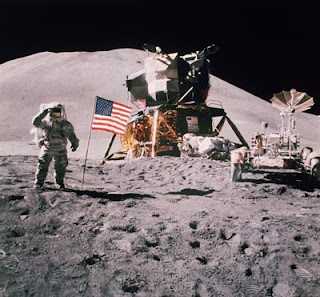 NASA decided it would be a great idea to try and blow a hole in the moon the other day. Now I know there are probably women working for NASA too, but I’m thinking that the males were the driving force behind the idea. If I didn’t know better, I’d say alien males across the universe have been using the moon as their playground to set off explosions for a very long time. After all, it is pock-marked with massive craters.

I’ve heard it cost us around $97 million to run a camera-ready rocket into the surface of the moon and videotape this so-called explosion. That’s a lot of firecrackers.

The reason for this mission was to find out if those shadowy places in the craters were somehow hiding ice water. Now I’m pretty sure our Astronauts take water with them when they go to space, but just in case they run out it would be nice to be able to make a pit stop on the moon, get a nice long drink of ice water and be on their way. If indeed there is water to be had in them there craters.

I think it would have saved a lot of money if they had just erected one of those signs we see along the highways, “Free ice water at Wall Drug. Only 238,857 miles to go.”

That way all the space explorers would have something to look forward to as they grow tired of playing travel monopoly or counting the number of asteroids they pass.

The “explosion” went off as planned. People around the world were watching in rapt attention for…something. No burst of flame, no shooting rock, no nothing. NASA said to be on the lookout for a plume of smoke, but I could not detect even a small sign that anything at all had been disturbed on the surface of the moon.

$97 million dollars and nothing to show for it. Not even a few missing fingers.

Boys have been blowing things up for fun ever since the beginning of time. There is no rhyme or reason. They just like to watch things explode. The problem with explosives is that they are so unpredictable. That’s why so many guys have blown off a finger while trying to kill a frog.

In California a 23-year-old young man went to the hospital with four fingers missing. He had been mixing homemade explosives in his family’s garage. The Internet is just a world of information for idiots with nothing to do. Apparently, his mother and brother were also entrepreneurs. Inside the house they ran a daycare and outside in the backyard they grew a nice crop of marijuana. The police love to “bundle” their arrests. It makes it so much easier than getting a speeder here, a hooker there, a mugger down the street, etc.

Back on the moon…

NASA says they got lots of great information through this experiment. They didn’t say if it was worth $97 million dollars but what the heck. Our government just threw one and a half trillion down the drain. Why not play demolition derby with the moon?