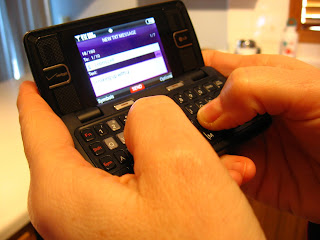 As the song says, Breaking up is hard to do. But not anymore. People using Facebook, phone texts, twitter, or email to break up with their significant others is on the rise. In fact, one of those all-important surveys reported that young people think their cell phone is their most important piece of social interaction. I guess no one told them they could communicate face to face. The importance they seem to put on their relationships is quite evident by the way they say adios. Very mature.
When I was in Junior High, when a boy broke up with a girl (totally hypothetical example of course), he would write a note or send his message by word of mouth through his sidekick-spokesperson. This “guy friend” would relay the message to your “girl friend” and you would be boyfriendless and brokenhearted, or footloose & fancy free, depending on your outlook.
That was then and this is now. Apparently, not much has changed, except that these aren’t just tweens and teenagers breaking up every other day with their latest crush. These are adults: people old enough to vote, go to war, drink alcohol, and drive children on school buses. Not necessarily at the same time.

Or perhaps you want to breakup without actually expending any energy at all. You would probably do it on Facebook. Just “unfriend them.”

Twitter is a one line kind of communication for those individuals of few words. Perhaps attach a link to your favorite break-up song and dedicate it to your lover. Send it out to all your followers as well. That way you won’t have to repeat yourself.

Email is the most personal. But it doesn’t have to be. Just put “it’s over,” in the subject line and have spamblocker take care of any responses.

It’s not just singles that use this method either. Want out of your marriage, but just can’t face that person you slept beside for ten years, ate with, laughed with, had children with, and went into debt with? Text them. It’s quick, concise, and so easy. “I want a divorce.” You don’t have to explain yourself. You don’t have to witness any tears or anger. You don’t have to deal with life up close and personal.