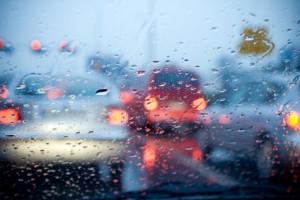 I was driving home from Nebraska the other night when suddenly the skies grew dark and rain began to pour down. I flipped on the wipers and continued on my way, hoping to avoid an incident of hail damage to my fairly new car. There was no hail, but the rain grew heavier and heavier and pretty soon visibility shortened considerably.

Traffic that had been traveling at the brisk pace of 70mph or so, quickly slowed to under 40mph. Still determined to reach home within my normal six-hour time frame, I pressed on. But as the weather grew wilder, fellow drivers grew stupider.

Apparently, they didn’t have on their smart glasses like I did, because as I tried to pass in the “passing lane” (the left lane, for those unfamiliar with the term) other drivers began to hug the center line and even embrace it in a full straddle as though their car might at any minute be swept from the highway and thrown into the sea.

Point of fact: As many of you know, Minnesota is no where near the coast.

Other drivers refused to leave the passing lane and move to the “slow lane” (right lane reserved for those going slower than other traffic and/or under the speed limit), even though they were blocking traffic and potentially in a position to be rear-ended due to lack of visibility, and the fact that many failed to put their lights on.

In the past I’ve actually been in worse weather on my motorcycle. Not something I’d like to relive, but I did survive. Hands down it was much wetter and more uncomfortable than riding in an air-conditioned vehicle with radio, cell phone, and seat warmers at hand. Even riding motorcycles with 60 mile an hour gusts nearly blowing us over, we managed to stay in our own lane. So I kind of, sort of, expected the same from big, heavy, rain-protected cars that aren’t blown about quite so easily.

Finding that many drivers who were not adhering to customary rules of driving etiquette, and afraid that they would at any second stop abruptly in front of me, I decided to get off and sit for a while. I pulled off on an exit with a McDonald’s and sat in the parking lot watching dozens of cars pass through the fast food drive-through like squirrels stocking up for winter–or Noah stocking up for the flood.

Before I left, an ambulance showed up for someone. I wasn’t sure if the stress of driving in the storm caught up with them or a chicken McNugget was somehow the culprit, but when I continued on toward home I passed another McDonald’s and there was another ambulance with lights flashing.

So now we know. Avoid the big M when traveling. And if you can’t drive in the rain… move to Nevada. It’s closer to the ocean.