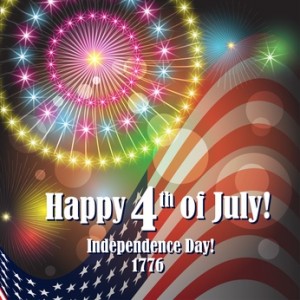 This summer is popping by like a string of firecrackers, the days hot and quickly gone. I don’t know what happened to June. The last thing I remember was thinking I would get a lot of writing done… More thinking got done than writing, but I’m sure July will be more productive. At least, that’s my hope.

Tomorrow is the country’s big day. Independence Day, or the Fourth of July as most people think of it these days, is usually filled with grilling, picnicking, parades, and watching fireworks explode in the night sky. It’s a celebration commemorating the Declaration of Independence from the tyranny of Great Britian. Take that – you red-coated English poppycocks!

We have other forms of tyranny to contend with in this decade, but Americans are still much the same. Independent. We don’t like anyone telling us what to do, how to think, what to eat, what to believe, or where our money should go.

In fact, I don’t even like the dentist telling me I should floss daily. Sometimes in defiance, I only do it once or twice a week.

We certainly don’t like anyone forcing us to drink tea. Americans are tougher than that. We drink coffee…black and strong. And if anyone says any differently, they can just go to London!

Americans shoot off fireworks because…well, we really like explosions. I’m pretty sure Hollywood has some kind of clause in their movie contracts that say, “there must be at least four explosions in every theatrical release to keep the film from being a complete bomb.” And yet…many are still bombs. Go figure.

Actually there are other reasons for shooting off fireworks on the 4th but the younger generation might not remember them. I didn’t actually live back in the day when we fought for independence from the King of England (shocking, isn’t it) but I often get a little choked up singing, “The Star Spangled Banner,” written by Francis Scott Key in 1814. I also think it’s pretty funny that they set his words to a popular British tune. Kind of like thumbing our noses at the King every time we sing it.

O say can you see by the dawn’s early light,

What so proudly we hailed at the twilight’s last gleaming,

Whose broad stripes and bright stars through the perilous fight,

O’er the ramparts we watched, were so gallantly streaming?

And the rockets’ red glare, the bombs bursting in air,

Gave proof through the night that our flag was still there;

O say does that star-spangled banner yet wave,

O’er the land of the free and the home of the brave?

It gives you a little tingle up the spine, doesn’t it?

Happy 4th of July! See you at the local fireworks show!