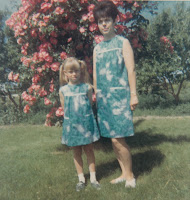 If you can’t tell, this is a picture of my mom & I. Yes–matching dresses were chic and cool in 1968. And no–it wasn’t just the sun in our eyes, we always looked this happy when we wore them. J

Mother’s Day is May 10th, and so I am dedicating this installment to mothers everywhere. Hope you all have a wonderful day and feel the love of your children as they endeavor to display it in works of art, hugs & kisses, flowers, or breakfast in bed. If they don’t do any of those things then you probably didn’t raise them right and there’s nothing you can do at this late date. Sorry. L

Hallmark advertises a special line of cards that play a few bars of a song or that you can record on. The idea that musical or recordable cards are superior to cards with printed sentiments is expressed in the price. Yes, they are more expensive. Therefore they must be better. Which only goes to prove that writers are underpaid.

An elderly man in Germany received just such a card, placed it on his windowsill, and promptly forgot about it. During the next few days he kept hearing this annoying little serenade over and over again, at irregular intervals and at all hours, until he thought he would go crazy. He fussed and fumed about the apartment, muttering death threats against his neighbors for playing the tune relentlessly and finally decided they were doing it on purpose just to make him angry. When he couldn’t take it anymore, he called the police.

The officers came into his apartment and waited to hear the music the man said would certainly play at any moment. The breeze blew in the open window and the card fluttered in the wind. The tune played just as the man predicted. The officers solved the case and the bluster fizzled out of the old man in an instant. He was relieved to know his neighbors were not trying to drive him insane. But I’m pretty sure he took that card and burned it, recorded music and all, in spite of the exorbitant prize paid to send it to him.

So if you were contemplating a recordable card over a lovely, homemade, construction paper, cutout card, you might go with your creative side. Your mother will appreciate the time spent on her behalf and she won’t want to ring your neck for giving her something just as annoying as that battery-operated machine gun you owned as a child.