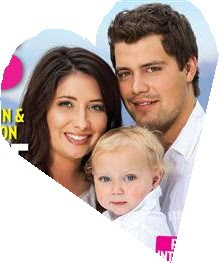 Tis the season of weddings. Love hangs hot and heavy in the humid air of summer like a canopy of hugs and kisses. Brides and grooms everywhere light unity candles, stomp glassware, or bungee jump together to prove their love to those watching.

Most of us have acted stupid for love at one time or another. You may have married the person you were a fool for—or you may have eventually realized it was just a touch of insanity and inserted your finger in a light socket for self-medication shock therapy.

But there is one story of love in the news that defies all reason. Sort of like calling the movie, Dumb & Dumber, a classic. Actually, that movie title completely encapsulates the news story I’m referring to. Sarah Palin’s daughter, Bristol, has once again become engaged to Levi Johnston, the father of her baby.

Levi has said so many hurtful and hateful things about Bristol’s mother and family, and done so many stupid things to get the attention of the Palin-hating media that I assumed he had been scratched off the Palin’s Christmas list with permanent marker. After all, the Bible says, “Love is Patient, Love is kind.” It doesn’t say love has Alzheimers! But all it took were a few text messages from her baby daddy and Bristol was sucked into an alternate reality where love conquers all and memories are blessedly erased with a heavy magnet to the head.

US magazine infers that Bristol and Levi gave them the exclusive story of their secret engagement even before informing their families. Bristol is quoted as saying she is intimidated by what her mother’s reaction will be. “Hopefully she will jump on board,” she said.

REALLY? Jump on board a bullet train to the far side of the moon? Sounds fun. I’m sure once you and Levi get that reality show contract signed and start filming, your mom and dad will realize how foolish they’ve been and jump on board. Perhaps even do some guest appearances and bring a little drama to the show. Like a Caribou hunter’s rifle!

So, if you think your daughter is marrying the wrong person, ruining her life, or causing you unnecessary misery with her choice of a mate—think again. It could be worse. Much worse. It could be Groomzilla!