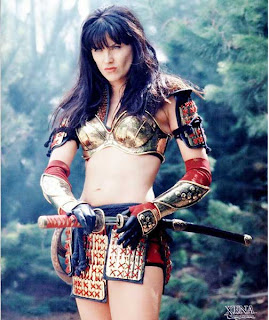 I’ve been trying to get back into shape—as in—without the extra bulges and rolls that seem to have accumulated within the past year. I’m not sure where they came from, unless you can get them from hard work and perseverance. Well—maybe Godfather’s Pizza, jalapeño potato chips, and chocolate ice cream may have had something to do with it, but that’s just a theory.

Exercise has always been somewhat of a chore for me, even when I performed it religiously without skipping a day. Those endorphins they talk about on exercise shows are obviously non-existent in my bloodstream. They don’t make my workout time more enjoyable or energize me to go that extra mile. If I have them at all, they are floaters—dead endorphins, floating around in my arteries, clogging the flow of oxygen to my brain and causing my heart to work extra hard. In other words, they are working against me—not for me.

My early 40’s were actually pretty good. I never looked like Xena Princess Warrior, but who does? Well, Lucy Lawless does, but she doesn’t count. I did have muscle tone and abs of…maybe not steel, but definitely sheet metal. So, where did it all go? What happened to that woman who fit into all the clothes now stored in the attic? Why are my late forties so flabby and without form?

This is just a theory, but I think I may be on to something. God made women’s bodies this way; slowing, plumping, and sagging into what I think is called a grandmother, to be a marsh mellow of love and nurture to the babies our babies will someday have, a safe haven in any storm. The problem is, our babies are not having babies. They are not anywhere near being on the same page or timeframe, and my body doesn’t seem to know that it is ahead of schedule.

So I am pushing the folds and droops back into place. It may take a while but everything worthwhile does. I can’t afford the luxury of plastic surgery, so I’ll have to do it the hard way—quit eating and beat the dead endorphins out of my bloodstream with a pulse-pounding exercise regime that would frighten Billy Blanks.

I’m sure you will all stick around to make sure I actually succeed in this. My own “biggest Loser” team, to cheer me on and encourage me not to eat that third donut. As my accountability partners, feel free to call me fat cheeks, lard butt, Countess of Monty Crisco, or whatever it takes to turn back the hands of time to days of yore when my arms could be bared in the summer sun without worrying about being called a flying squirrel. When I could wear shorts and not resemble a giant baby with dimpled knees. When I didn’t have to wear baggy shirts to hide the muffin top poking over the edge of my jeans. Life was good when I looked like Olivia Newton John in her “Get Physical” video. Okay, I never really looked like that, but a girl has to have a goal…