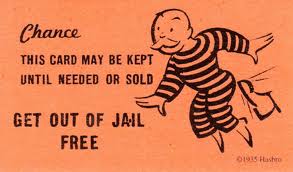 It seems as though everyone tries to play a Get out of jail free card these days. If you don’t have your own card or mental illness, just watch enough reality television and you will be sure and see something that will fit your needs.
Like the man who worked for the FBI with top security clearance who managed to steal thousands of classified documents and when arrested for the crime, immediately diagnosed himself with Hoarders disease. (That would be the sickness that infects individuals with the inability to throw away a milk carton, plastic bag, or rat turd, cause someday they might need it. Or maybe they’re just saving the environment for the rest of us by sacrificing themselves on the dunghill of their own making. Not sure if we should thank them or institutionalize them.)
What was this man going to do with thousands of classified documents? Probably not sell them…right? Maybe he was out of old newspapers to line the rats nest.
I personally have never watched Hoardersor Jersey Shore or Next Top Model… I’m not bragging – just admitting my dislike of so-called reality shows. The commercials scare me enough. I once watched an episode of Survivor and started having anger management problems. I don’t think I should be allowed anywhere near an island of people that irritating. After all, Menopause is a sickness too and a pretty good card to play after taking out twelve over-tanned, bug-eating, whiny weirdos, slowly and methodically with a scope and rifle.

I think it all started with the race card that O.J.’s lawyer played and it’s just gone downhill from there.
We’ve got the Post-Partum Blues card if you murder your children, the Kleptomania card if you’re a celebrity that likes to shoplift, the Addiction card for pretty much any and every form of bad behavior these days, the I lost my job card for men that go on a shooting spree at their last place of employment, the McDonalds served my McNuggets too slow card for crazy people that jump through the drive up window and beat the poor kid working there, the Girl’s Just Want to Have Fun card for the woman who disappears for months with the guy they met on the internet and everyone thinks they’re dead, the Devil Made me Do It card for people without an imagination, and my personal favorite – My Dead Mother Did It. Oh wait, that was Psycho. But it would be a great card to use if you owned a creepy motel and murdered women in the shower.