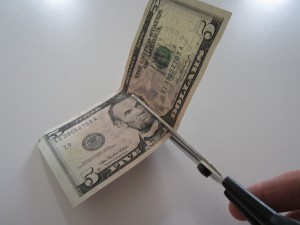 After decades of spending like Imelda Marcus at a DSW, throwing clothes away because they’re no longer stylish, and dumping leftovers down the garbage disposal rather than having the same thing twice, Americans have suddenly become frugal.

Yes—it is now chic to visit the second-hand store for name-brand jeans. The only difference is the price. The holes are still included.

People are choosing items from McDonald’s dollar menu instead of supersizing their butts and shrinking their wallets.

Walmart has gained customers from the other side of the tracks — the side that would once drive twenty miles out of their way to a Target store rather than be seen entering the aluminum walls of one of Sam Walton’s “only things made in America will be sold here,” discount stores.

I can see why some people would have a hard time feeling comfortable shopping in a Walmart. There are more languages spoken daily inside a Walmart than in Walt Disney World during any given week. The clothes sold there all come in a one-size-fits-most stretchy polyester. And they have door greeters that try to talk to you when you go in and out.

Personally, I like to hear English when I shop, don’t look good in stretchy knits, and don’t like to be greeted when I’m shopping for Midol and Tampons. But that’s just me.

Lately the frugal people with saving ideas have made the news, newspaper columns and Internet articles. They talk about getting their groceries for free by clipping coupons, saving gas by working at home, or making pizza from day old bagels. They are the flavor of the month, or maybe the flavor of the next decade, as the economy settles into the mud.

Some ideas out there have been very helpful. Like cutting your lotion bottles in half so you can stick your hand down in there and get that last bit out. Or unplugging things that aren’t being used so electricity isn’t dripping out like a leaky faucet. But shutting off your car’s engine every time you stop for a red light is not a good idea. (If that is you—stop it!! Road rage can be very costly as well.)

We would all like to save money, conserve energy, and live wisely. As long as it doesn’t infringe on our rights to buy what we want, take twenty-minute showers, and eat Jalapeño potato chips.

So, I’ve put together a few tips on saving money. I hope this will help as your stock dwindles and your life savings melt away under the scorching, wide-eyed, Botox glare of Pelosi’s spend-like-there’s-no-tomorrow leadership.

I hope this helps. Frugality can be fun if you go about it with the right attitude. It may even overtake Football as America’s favorite pastime. It’s all about the game and winners and losers. Savers and non-savers.