For those of you who still haven’t heard the name, Lady Gaga, you might want to listen up. Not because she is anything new or different from the other raunchy, young women singers following the likes of Madonna or Brittany Spears who believe “a show” is more important than talent. I’m not saying they don’t have talent, but with all the nudity, bizarre behavior, and personality disorders, it’s hard to tell. I’m more concerned with the effect they have on young women.

We all know girls tend to impersonate, or at the very least try to dress like their “idols.” Like sheep, they follow the latest trends, even if it means wearing their underwear on the outside of their clothing, or not at all. I know experts have been saying for years that magazines cause girls to have eating disorders because the photos are all air-brushed and apparently teenagers are too naïve to realize no one can really look that perfect in person. But I don’t think it is magazines anymore. I think its music videos.

Lady Gaga recently had a video, which I’ve only seen a news clip of, where her eyes, and who knows what else, were enlarged and rounded to look like she was a doll or a Japanese Anime cartoon character. As we all know, eyes are not naturally round. Even teenagers should know that. But because she’s the hottest, whacked out celebrity right now, girls everywhere want to have eyes like the ones in the video. Now you may ask, WHY? But the question they ask is: Where can I get some?

Apparently, you can go online and purchase special round colored contacts to make your eyes appear that way. Are they doctor approved? Certainly not. But why would that stop kids? Can they damage their vision? Yep. Do teenagers think it will happen to them? Nope. Are there any parents left in the world who actually monitor their kids and know what they’re doing?! 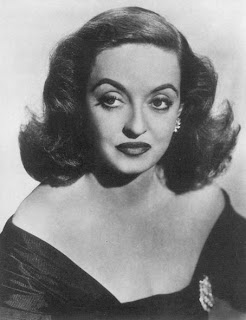 Bette Davis had eyes that were quite large. I always thought she looked bug-eyed and scary. It may have been typecasting, but she played crazy really well. And since she was a famous movie star, someone wrote a song about her. “Bette Davis Eyes.” Pretty creative title, huh? There weren’t any special effects in the video, other than shadows and people dressed in silly masks, since music videos were just getting off the ground, but Kim Carnes did have a very scratchy voice. I wonder if any girls decided to damage their voice boxes so they too could sound like Rod Stewart on estrogen.

Lady Gaga is in the limelight right now with all of her antics, but someday she’ll no longer be the flavor of the month, and the bug-eyed look will be so over. I wonder if any of her clone followers will still have vision in their big round eyeballs by then.