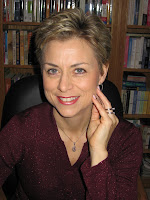 As a child I never played with Barbi dolls, so I didn’t have unrealistic dreams or body image. I did play with GI Joe though. That may explain some things. Like why I enjoy shooting guns and think guys in army fatigues are pretty hot (I’ve seen the buff, plastic bodies beneath that camouflage). But as a teen I didn’t starve myself or exercise like a fiend, or pore over fashion magazines, wishing I could be something I wasn’t. I was basically “comfortable in my own skin,” as innumerable writers parrot in their novels and really makes no sense whatsoever. Whose skin would they be comfortable in, if not their own? Is it possible to trade skins with someone? Well, we won’t go there. Silence of the Lambs was probably one of the creepiest movies I’ve ever seen. Watching that man sew women’s skin into a lovely new pelt for himself completely squelched my desire to be a seamstress. But was it comfortable, you may ask. I think not.

Anyway, when I was young(er) I would’ve been fine with someone walking up to me and saying, “You look just like___ so and so. (Blondie or Olivia Newton John, or someone I thought was hip and cool. And on occasion they did. Of course, it was usually, “you look just like your brother,” which is never a compliment to a girl.) But it’s been a long time since I’ve had one of those moments. Until now.

I’m pretty sure that even if I had dark hair random people on the street would not come up to me and say, “You look just like Sarah Palin.” I was just as sure that I would never be told I looked like another political celebrity. But when you are informed, not once, not twice, not three times, but more, that you look like so and so, you begin to wonder if you’re living in denial, or you definitely need glasses.

Now to be honest, the strange glances I get on the street could just be my imagination. I’ve always been slightly paranoid that someone is looking at me funny. No one has ever run up and asked me if they could take a picture with me or if I would kiss their baby, but that may have to do with the person I resemble. I don’t think she gets a lot of babies thrust her way because she’s kind of scary.

But when my husband has a photograph of me on his desk and his clients either ask why he has a picture of Hillary Clinton, or informs him that his wife looks like Hillary Clinton, I have to look in my magnifying mirror a little closer. What are these people seeing?

Next—I went to buy a motorcycle last summer and gave the salesman my drivers license. He informed me that the guys in the backroom all thought I looked like…you got it! Hillary Clinton.

After that demoralizing episode—I thought I looked like Meg Ryan in that picture (before she pumped her lips)—it took me a very long time to get past my Hillary Doppleganger phobia. But I finally did. I quit thinking about it. I put it behind me. I was once again “comfortable in my own skin.”

Then this past Wednesday I went to get my hair cut. I wanted to make sure the lady knew what I was asking for, so I brought along a photo of myself with the style I preferred. She glanced at it and nodded, then took me back to the sink. While she’s lathering my hair with shampoo, she says, “That was a nice picture of Hillary. She looked real pretty in it.”

Completely baffled and confused, I quench my eyes up, (probably exactly like Hillary would) and say, “What?”

“The picture you showed me,” she says nonchalantly.

I laugh. You know that hysterical laugh that Hillary does sometimes when she hates the person she’s talking to and wishes she could punch them in the eye instead? It sounded like that. I say, “That was a picture of me.”

“No it wasn’t!” she argues, as though lying about bringing the picture is weirder than the thought that I would really bring a picture of Hillary to a salon and ask to look like her on purpose.

She demands to see it again and I show it to her. “Wow, you two could be sisters!” she says with complete and utter awe. She’s a big fan of Hillary, you see. She’s from New Jersey and a dyed-in-the-wool democrat.

I should have taken this latest episode as a compliment. She informed me that it was. But I’m having a hard time dealing with living in Hillary’s skin. It’s scary in here. I’m angry a lot and have these ambiguous feelings that someone did me wrong. But don’t worry. I’ll get back at them, if it’s the last thing I do. 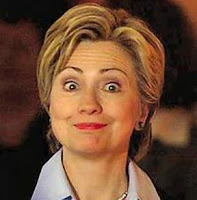