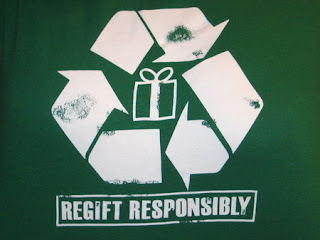 The holiday season wouldn’t be special without a warm, crackling fire. So here I am again sitting before our big screen television, watching the Fireplace DVD I got from Amazon. It’s really mesmerizing. This is the second year with a Christmas fire and I quite like it. It’s what you might call an “economy fireplace,” but for the price of a small bundle of wood at the gas station we can have a fire as many times as we like, and no messy ash to clean up afterwards.

With the state of the economy, everyone is thinking up new ways to conserve, reuse, get by with, whatever. Americans are very imaginative individuals. Some people turn the thermostat down in their homes until the dog’s water dish freezes over (I’ve been accused of that), others dig pop cans out of their neighbor’s recycle bins to sell for ready cash. I’m personally stockpiling used plastic containers and Ziplock bags. Just wait—in the near future there will be a ban on plastic manufacturing and it will be worth more than gold to housewives everywhere. How else are they going to keep leftovers fresh?

President Obama is even trying to help out. He’s going to save our economy by word conservation. He doesn’t like to waste words, so he uses the same ones over and over again. Here is a condensed version of all of his speeches: “Let me be clear—it won’t happen overnight. There will be setbacks and false starts, but make no mistake, you critics and naysayers, unprecedented change isn’t easy.”

Hollywood is conserving talented writers by only making movies that have already been made multiple times. I’m still waiting for the “Gone with the Wind” remake. It shouldn’t be long now. They’ve used just about everything else. Tom Cruise will probably play a very convincing Rhett Butler. They both startled women by popping up on couches. (For those who have never watched this classic…lucky you for being ignorant of the storyline. That way you won’t be disappointed when they mess it up.)

Television networks are also conserving. They refuse to pay actual actors anymore, but rely on idiots off the street willing to do most anything to get their face onscreen. Reality shows have become the poor man’s entertainment. Instead of a chicken in every pot, we are promised an idiotic premise for every show and an idiot in every scene.

Banks are definitely being more conservative. Instead of giving away a free toaster for setting up an account with them, they give you the “bonus” option of tsunami insurance. By taking thirty dollars a month directly from your account, they can guarantee you that when that tsunami hits Minnesota you will be completely covered. It’s their gift to you for being a loyal customer.

Regifting is an attractive option this year. We all have presents from in-laws or family members who hate us, that we’ve never worn, used, or known what they were. Just feign ignorance, wrap it up nicely, and give it back. They’ll never call you on it. Well, probably not.

The state of the economy, lost jobs, stimulus debt, and the exorbitant price of specialty coffee, has me thinking it’s time to really knuckle down and learn to live with less. So, don’t expect any presents from me this year. I’m on a spending freeze.