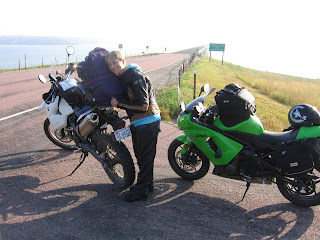 My husband & I went on a five-day getaway to the Black Hills of South Dakota. It was a last ditch effort to get away from our grown children, the dogs, and the feeling of impending doom Leon always has as tax season slowly encroaches like the shadow of a giant Ogre.

We decided to stop at the family farm on the way across South Dakota and stay the night, killing two birds with one stone. (his words-not mine) We pleased his parents and got one free night of lodging. That may sound cheap, but he is an accountant after all. You have to cut back somewhere. I didn’t want it to be my Dairy Queen Moolatte.

The next day we took our time wandering through the Badlands from the saddles of our motorcycles. Much like cowboys of the old west, only with paved roads and convenient rest stops where you can buy overpriced snacks and pottery with pictures of buffalo.

We stayed three nights at the Best Western Inn in Rapid City. There was a bit of nostalgia involved when Leon booked the room. We used to stay there during MEA weekends when our kids were small. The Best Western once had an indoor pool, but that has changed. So—no swimming for Leon cause the outdoor pool was already closed for the season. I had no problem with that as I still refuse to put my face under water that doesn’t come out of a showerhead.

I didn’t mind the cheap accommodations until I lay down on the bed. Hospital beds have a bad reputation as being hard and uncomfortable. They don’t even compare! This bed had obviously been cut from a rock quarry in the hills. The pillows were nearly as firm. I’ve never been bruised by a bed before. Okay, maybe I am a bit spoiled by our King-sized sleep number at home, but toddlers couldn’t even jump up and down on that motel’s bed without breaking their legs!

We spent our days cruising the mountains, winding around narrow cliff face roads while taking pictures with our cell phones. (Walking and texting at the same time is probably the second most dangerous thing you can do with your cell phone.)

We went through Custer State Park, stopped in Deadwood to visit Wild Bill and Calamity Jane’s graves and even drove out to Wyoming to see Devils Tower one afternoon. Hundreds of miles of curvy roads, thousands of bugs squashed against my helmet shield, two sore and aching buttocks, and one really, really hard bed at the end of the day.

Now you are probably wondering where the romance comes into this story. Well, at the end of every long day’s ride, my husband would shake up the big bottle of Aspercreme and massage it into my aching muscles. Yes—romance does come in a bottle, in the pain medication aisle of your nearest Walmart.

The day we headed home turned out windier than the Bermuda Triangle during hurricane season. After nearly being thrown into the middle of the freeway while passing a semi truck trailer, we decided to get off onto highway 44, pass back through the Badlands and stop once again at the family farm for one last free night’s stay.

Following a pack of Harley riders, we pushed on through cattle grazing land and an Indian reservation, fighting a fierce wind coming from the south the entire time. My neck was bent sideways like Gumby. I finally couldn’t take anymore and stopped along the road to vent my frustration and peel off my leather coat and chaps. My nuclear core eventually cooled but the splatting of bug guts against bare skin was a little too “earthy” for me.

Hwy 44 goes on eternally. As far as you can see there’s no gas station, rest stop, or even a tree. Like some lost soul in a desert I went through different stages of emotional breakdown.

First I was angry at the wind for blowing and at my husband for taking me down this road instead of letting me die on the freeway. The distance between our bikes grew as I gave in to my temper.

Then I realized God was in control of the wind and I was his child, so therefore I should be able to command it to stop and it would be done. “Be still!” I yelled into the enclosed space of my helmet.

The wind continued to bend my neck at a ninety-degree angle. Not so surprising. After all, even Jesus’ disciples were never recorded stilling a storm.

So I pleaded with God to take this trial from me. “Stop the insanity!” I yelled.

I was sure that I was being taught patience the hard way.

Finally, I hit rock bottom. I just wanted God to take me home so I wouldn’t suffer anymore.

That night I fell into an exhausted heap on the bed upstairs, sinking down into a mattress not carved from granite.

On Sunday, my loving husband suggested I save myself another day of wind buffeting by riding close enough to draft his bike. I stayed glued to the left rear side of his BMW like a leach on a mud turtle. The ride was much more enjoyable as I learned to follow.

When we stopped to rest, I told him I’d found the G-spot and was sticking there.

“You mean the sweet spot,” he said.