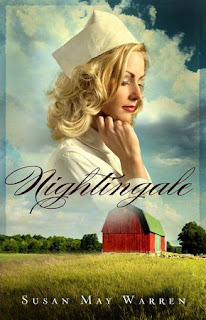 About Nightingale: Esther Lange doesn’t love her fiancé—she’s trapped in an engagement after a mistaken night of passion. Still, she grieves him when he’s lost in battle, the letters sent to her by the medic at his side giving her a strange comfort, so much that she strikes up a correspondence with Peter Hess, an Iowa farmboy. Or is he?  Peter Hess is not who he seems. Indeed, he’s hiding a secret, something that could cost them both their lives, especially when the past comes back to life. A bittersweet love song of the home front war between duty and the heart…a battle where only one will survive.
My Review:
Nightingale is set in a small town in Wisconsin, at the tail end of WWII. Esther is a young woman alive, but not really living. She’s in a holding pattern, waiting for the father of her toddler daughter to return from war, but secretly wishing he doesn’t. Living with his parents in a small town where gossip brews around her, she works as a nurse in the military hospital and tends to other survivors of the war, men who have returned with missing limbs, or worse, minds shattered by the carnage they have endured.
Esther has a gift for healing, even while her own wounds, the sins of her past, continue to eat away at her heart and soul. Unable to forgive herself, she has no reason to believe the God of the universe would freely shower his grace upon her in love and forgiveness. As an unwed mother, she deals with the harsh judgmental attitudes of those around her.
Peter is a medic, dealing with his own secret past. When Peter sends Esther a letter from Linus, and includes a personal note from himself as well, they start up a correspondence that begins to heal something inside them both.
Nightingale is a real treat to read. The letters between Esther and Peter are lyrical. They made me wish for days of old, long before email and text messaging, when words were carefully constructed and thought out, and letters were preserved and read over and over until the paper was thin and lined with creases.
This is my first book by Susan May Warren, but it will not be my last. She has a wonderful way with words that brings you deep into the story, emotionally immersed in the lives, thoughts, and feelings of her characters. I wholeheartedly suggest you pick up a copy and read it for yourself—with a box of Kleenex at hand.
You can buy Nightingale here. Be sure and check out the flip camera giveaway in the sidebar –>
Follow the blog tour:  http://www.litfusegroup.com/Blog-Tours/nightingale-by-susan-may-warren.html)
I received a free copy of Nightingale so I could write a review.