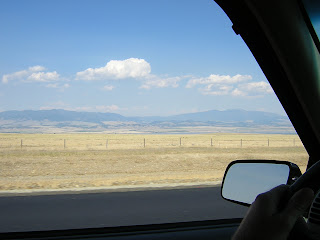 It’s that time of year again. Vacation planning. The pull of warm weather, kids getting out of school, or just the need to travel after being confined during the winter, makes us dream of places we’ve never been.

For my husband and I, April the 15th is the spur that makes us think of getting away. Tax season is officially over today and now it’s time to chart a vacation. I say officially because it’s never really over, not for tax accountants, and it takes my husband about a week of doing absolutely nothing before he stops thinking about all the extensions he has to do when he gets back. A week is usually the entire length of our vacation, so unwinding is basically a futile endeavor.

Since flying is often so expensive and now you can’t even bring a carryon without getting charged exorbitant fees, we tend to drive wherever we go. Driving is all well and good for hubby. He likes to drive long distances and see how far he can go before my bladder bursts. He actually thinks it’s relaxing to listen to talk radio and eat beef jerky while barreling along at eighty miles per hour. (I totally meant to say seventy miles per hour. We all know eighty is illegal, and my husband, wound tighter than Al Gore’s corset, should never drive that fast when he’s still pressurized.)

I’m thinking about getting my husband a GPS unit for the car though—cause I really hate reading maps. Every time we go on a trip he sticks a stack of maps in the car under the seat. Then about twenty miles down the road, he asks me to pull out a particular map and tell him how far it is to Albuquerque, or what the highway marker number is on the east side of Chicago, or which is the most scenic route to Boston, or what the name of a lake is that we’re passing. I have no idea why he needs to know these things and I hate reading maps! It’s supposed to be a vacation, for heaven’s sake! Not Geography 101!

I want to sit back and enjoy my book, not squint at some stupid paper you have to unfold twenty-four times, that never folds back up the way it started.

Maps were made for men. They have tiny little letters and numbers and symbols that mean absolutely nothing to me. If I wanted to study Greek, I would have gone to Seminary. Ever since Pirates put an X on a treasure map, men have been obsessed with following little squiggly lines across a piece of paper. The only problem is—they also want to lead the way, steer the ship or drive the car. They look across at us and think we’re not doing anything important. Therefore we are issued the status of navigator—whether we want it or not.

As navigator I think that I’m entitled to a few perks. Like deciding to stop and shop when I see an Outlet Mall. Or choosing whether or not to take the scenic route (Definition: the long way there). At least I should be able to direct him to pull into the next rest stop without getting the third degree about how much Pepsi I’ve consumed!

I have this strange idea, and I don’t think I’m alone in this—that men should mark the route out ahead of time, so they know where they’re going. Cause we all know they won’t stop to ask, and with us as navigators, they now have someone to blame.

Leave a Reply to Anything Fits a Naked Man Cancel reply