Waiting has become a lost art form. We used to wait for water to boil, paint to dry, the skillet to heat, a letter to arrive, or someone to make up their mind. Not any more.

Now we buy water pre-boiled, fast drying paint, stop for fast-food, and text the first stupid thing that comes into our heads without using any mind at all.

As the wise and musically inclined Carly Simon once said, “Anticipation, anticipation. Is making me late. Is keeping me waiting.”

I don’t quite understand her logic. When I’m late, I’m usually keeping other people waiting. But anyway… she’s partly right. Anticipation is important. The longer we wait for something, the more the anticipation builds and the more important that thing or person becomes to us.

Our ancestors traveled in covered wagons to get from one end of this huge country to the other. Talk about building anticipation! It took them years to get where they wanted to go, making the daily progress equivalent to the distance a snail slithers across a gravel driveway. At night, women cooked over an open fire while nursing a baby and patching holes in their husband’s pants. There were no bullet trains, Jet planes, or fast cars. No Kmarts or Targets to pick up a new pair of pants on the way to Arby’s because she was too tired to cook dinner.

Tired wasn’t even in their vocabulary. They were either dead or alive. Although… sometimes they had to wait to get buried cause the ground was too frozen to dig a hole.

In the early 1900s people were still waiting, but the wait was a little shorter. Instead of 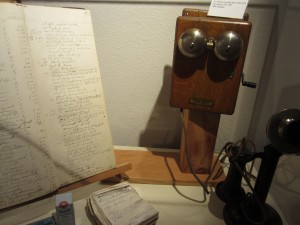 waiting for news by smoke signals or telegraph, they waited for a telephone call. You couldn’t just make a call yourself though. You had to let an official operator dial for you. So you waited for the lines to be connected.

In 1936, the Olympic Games were broadcast on television for the first time. Of course nobody actually had a television set yet, so they waited to hear the news on the radio about how that went. By 1947 they were waiting for Howdy Doody time.

By the fifties, men waited in line for the bus to go to work, while women wore pearls and heels while waxing the kitchen floor… then waited for it to dry so they could bake cookies for Beaver and Wally.

In the seventies, middle-aged parents waited for the news from an adult child announcing the birth of a grandchild, then waited for days or weeks for pictures to come in a sealed envelope addressed to Grandma and Grandpa. After they waited for their scheduled vacation time to visit their new grandchild, the kid was already jive walkin’ to Staying Alive and chewing gum… at the same time!

Nowadays, the only places we really have to wait in line is at the DMV, to buy food on a stick at the state fair, or behind fellow barefooted, potential terrorists at the airport.

I’m afraid that not waiting for things has turned us into self-absorbed, online addicts with the attention span of a gnat. A good, long, wagon train adventure with no access to technology might be just the cure for our lack of anticipation. Eagerly looking forward to a cold bath in the river fifty miles down the road and a week away, could reboot our brains and get our attention off the tiny screen and back onto the giant screen called life.