Halloween is the perfect time to read a book about vampires and dreadful things. CHOSEN has both, along with plenty of laughs and snarky dialogue. It is the first book in The Amish Bloodsuckers Trilogy and it’s totally free! So, pick up a copy today!

CHOSEN was optioned for screenplay last year and is now being marketed about the film industry in search of backers. Don’t be left out of the loop when the movie is finally released. The Amish Bloodsuckers has it all. Friends, family, Amish, vampires, a priest who teaches hand-to-hand combat, and of course, Jael, the slayer with ancestors who go back to Bible times.

Her mom tugged the blanket back down and placed a hand over her forehead. “You don’t 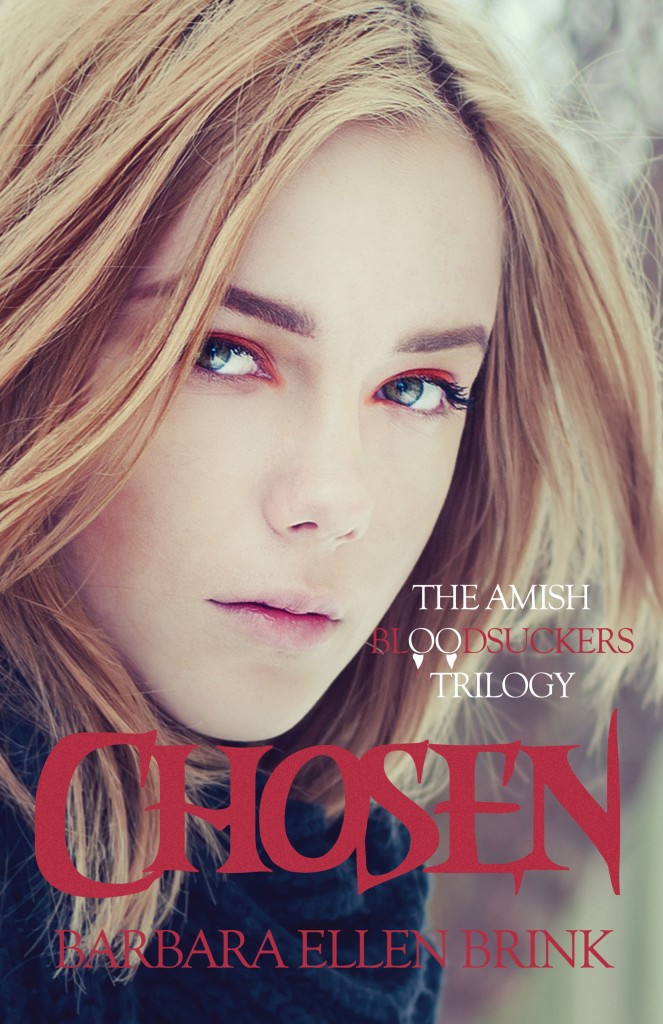 have a fever,” she said, as though exhaustion from being out late every night hunting vampires wasn’t a good enough excuse to skip school.

“You can’t keep skipping school just because you’re the Chosen. Even vampire slayers need an education. You’ve already missed four days in the last two weeks.” Her mom sat on the edge of the bed and smoothed Jael’s hair back from her face, tucking it behind her ear. She bent and kissed her cheek, then got up and moved to the door. “I’ve got pancakes cooking. Hurry up.”

Jael heard the door pulled closed. She forced her eyes open and sat up, dangling her legs over the side of the bed. The bright yellow walls of her room shone like fairy dust in her sleep-deprived vision. She rubbed her face and stood up, then groaned when she moved toward the bathroom. The muscles in her thighs were a bit sore after last night.

If she weren’t so tired, she’d want to go to school. She hated staying home with nothing to do, and missed seeing and talking to Brianna everyday. But it wasn’t the same anymore.

They used to be able to tell each other everything. Brianna knew that she worked out with her dad in the basement every night and weekends, that she was proficient in five different forms of martial arts and hand-to-hand combat, even that she could kill a scarecrow at twenty feet with a five-inch-blade after doing a double back flip. What she didn’t know–and Jael didn’t think she could tell her–was that she was a modern day vampire killer. A slayer of the undead. She could no longer truly share her life with her best friend. And who could she talk to about that–the school counselor?

The drive to school was uneventful. Jael didn’t feel like talking and her mom seemed to understand for once; she turned on a soft rock station and hummed along, tapping her fingers on the steering wheel to the beat. Jael leaned her head against the side window and tried to steal a few more minutes of sleep. When they finally pulled into the school parking lot and up to the doors, her mom just smiled and gave her the token send off, “Have a nice day,” before driving off as though she had somewhere important to be. Jael felt a bit underappreciated. Nobody knew she was saving the world from bloodsuckers except her family, and they just took it all for granted.

“Hey, Jael!” Brianna stood by her locker with the door open, rearranging things into an orderly mess. She flipped blonde hair over her shoulder in that absent-minded way she had, oblivious to the fact that it brought every boy’s attention her way. “Missed you yesterday. Glad you’re back.”

Jael smiled and opened her own locker, two doors down. “Sorry I didn’t call you back last night. I was sort of busy right then,” she said with a slight shrug. A definite understatement.

She had a different ringtone for every person in her phone directory and Brianna’s was a song from her favorite movie, A Knight’s Tale. Fighting a slippery, little, teenage vamp in a back alley was bad enough but right when she thought she had him cornered, he grabbed a metal garbage pail lid and slammed it against the side of her head, jumped up on a dumpster and tried to scale a twelve foot wall to get away. With her head still ringing, her phone started playing, We Will Rock You, and the pity she’d felt earlier for the little sucker drained right out of her.

She’d grabbed hold of his baggy-butt jeans and yanked him down off the fence. He stumbled and fell against a dumpster, then rebounded like a jack in the box, going for her neck with a feral snarl. She dodged to the right, and landed a karate chop to the back of his neck. He went down on his knees and she slipped the stake out of her waistband. Blood-shot eyes glared up at her when she yanked his head back by a thatch of shaggy hair and planted the stake in his cold, dead heart.

Just for a moment she’d felt regret. He slumped to the ground, an innocent looking young boy now, the fight gone out of him, his fangs withdrawn, his eyes closed in final death.

If he were very old he would disintegrate within seconds to the state of decomposition normal for his originally dead body. She could tell approximately how old a vampire was by the odor. Vampires that had survived long enough that their bodies should have turned to dust, smelled like moldy socks, but a newer vampire, say perhaps a month or so undead, would smell like the rotting corpse they really were.

The boy didn’t change and he had no strong odor. She pulled out the stake and stood there watching him for a good five minutes before she realized his death must have been very recent. Perhaps just days or hours since his funeral and burial. It was sad. She wondered about his parents and whether they knew he’d gone missing from his grave? Or perhaps he’d been killed by another vampire more recently and his parents didn’t yet know he was dead.

Now they never would. He would disappear, turn to ash in the morning sun, and they would assume he had run away like so many teenagers were reported to do.

“Jael?” Brianna was watching her with a puzzled expression on her face. “Are you all right? You seem sort of out-of-it.” She closed her locker, her history book in the crook of her arm.

“Yeah, just tired. Up late last night,” Jael said, dropping her book bag in the bottom of her locker and sliding out the book she needed for first class – Trigonometry. Ick. She’d rather smell a rotting corpse on a warm night than solve math problems.

“Okay…well… I’ll see you later, right?” She backed up a couple of steps, holding her gaze as though Jael would disappear again as soon as she let her out of her sight.

Brianna smiled, then turned and hurried down the hall toward Mr. Stanton’s history class. Jael watched her go, feeling as though she was losing the only real friend she’d ever had, and there was nothing she could do about it. She saw Marti stop Brianna outside the history classroom to say something and then they both laughed and went into class together.

Jael slammed her locker shut and twisted the combination lock. She couldn’t go on this way much longer. Kicking vampire butts at night and pretending to be an average girl during the day was taking too much out of her. She wasn’t cut out to live a double life.

Hope you enjoyed this excerpt of Chosen. Please leave a comment and let me know what you think. Happy Halloween! 🙂