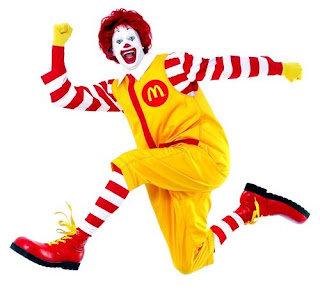 Back when advocacy groups were attacking Camel Cigarettes for using cartoon images of a camel for their advertisements, implying that it was a tool to manipulate young people to smoke, I sort of understood. (Although, it seems they make more “adult” cartoons than children’s these days. So I guess we can assume the producers of these cartoon programs are actually targeting children because they have an agenda to warp their innocent minds with filth.) But teenagers do not start smoking because they see cool characters on packaging and can’t resist. Teens smoke because they want to defy authority, look cool, or they just cave to peer pressure. This type of ad might attract children under ten years of age with cute little characters, but I’m pretty sure they would find it rather hard to purchase cigarettes even while wearing platform shoes and carrying fake I. D.
The newest scapegoat in America is of course “fast food.” It is accused of being the cause of every overweight child in the country—perhaps in the world. There have been documentaries made, government edicts for change, and multiple lawsuits brought against fast food chains for various reasons. Now they are going after Ronald McDonald.
The McDonald’s clown icon has been around for as long as I can remember. Personally, I think he’s kind of scary, but that’s just me. Kids seem to like him, and that’s apparently the problem. The newest advocacy group, “Retire Ronald,” is going after the McDonalds ambassador with guns blazing. They accuse this innocent, fun-loving, clown of atrocities far worse than any war criminal in recent history. They are quoted as saying, “The clown marketed fatty burgers and fries directly to kids without repercussion, and seemed to have a ball doing it.”
Retire Ronald released their own poll that confirmed everything they spout. Obviously, they know what they’re talking about. Although 65% of Americans had a favourable view of Ronald, 52% thought that corporations should not be using cartoons or characters to sell harmful products to children.
I’m thinking that perhaps those 65% who liked Ronald, didn’t know he was selling “harmful” products to children. In fact, rarely do children go into a restaurant and pay for anything on their own. Parents buy food for children. Parents are not cartoon characters, but some act like it. Parents are responsible for what their children eat and they alone should be able to make that decision with or without a clown to influence them.
McDonalds and Ronald were also accused of being the “face of the epidemic, and the engine behind it.” I’m assuming the group was referring to obesity. The engine behind obesity is personal choice—not a restaurant, and certainly not a clown. Like the old variety show where Flip Wilson would do something naughty and say, “the devil made me do it,” these groups are accusing a clown of forcing people to eat fast food against their will.
Now the clown in Stephen King’s novel “It” might very well scare children into binge eating. But Ronald McDonald does not have that power or persuasiveness. He is just a simple clown trying to keep his Happy meal from being stolen by the Hamburglar. So, lay off the clown, people! Go after the individuals who are really destroying our lives. Producers of reality TV!