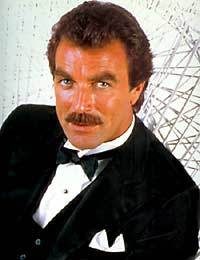 I was hoping I would wake up today and everything I didn’t like about the past year would be a dream. Remember the end of season nine of Dallas, when Pamela Ewing wakes up and finds her husband Bobby (dead since the end of season eight) in the shower, alive and well. She realizes she’d dreamt it all, and we realize the writers ran out of plausible cliffhangers. And it wasn’t even April Fool’s Day!

If April Fool’s Day could be used for good and not evil, it could be a conduit through which we filter the bad circumstances of our lives and begin again on April 2nd with a rosier available future. Like a portal through time or back to the future rewind, we could change things for the better.
Perhaps the last election. I personally would like Tom Selleck to be president. I know he would never allow our gun rights to be revoked. He might even make it a requirement to carry a weapon at all times. Wouldn’t it be cool to see the President of the United States holding a long rifle in his arms like Quigley Down Under. You never know when a wild dingo will come out of nowhere and attack. Tom would also look really good behind the presidential podium. He’d flash that Magnum smile, dimples and all, and he’d have those reporters at hello. He looks really good in a suit, but he also looks really good in a cowboy hat and buckskins. Obama would just look silly in a cowboy hat.

Another thing I’d like to change is the weight I’ve gained. Without exercise, dieting, or pills, I’d prefer to wake up and the rolls be gone—magically. Lose weight while you sleep. Remember that commercial? I always thought it was the best way. It’s so time consuming to workout. I could be doing important stuff—like writing more blog posts.

I’d like to be punctual, organized, and better at deadlines too. (Now I’m sounding like a New Year’s resolution) But I’m not far off, cause apparently before the western world started using the new Gregorian calendar back in the 1500’s, the New Year fell on April 1st. After the change, those who could be tricked into believing the New Year was still celebrated on the first day of April were considered “fools.” It seems like a very tame sort of joke and not very funny. I mean—who really cares if someone gets the date mixed up these days? Since I no longer go to school and write the date on the left-hand corner of my papers, I seldom remember what day it is, unless I look it up on the right-hand corner of my monitor, which is mightily convenient.

April Fool’s has come with sunshine and warm temperatures today. That should be enough of a gift for every Minnesota resident. We woke from a dream of winter cold to find spring fully sprung and tulips shooting upward toward blue sky. It does seem like a trick, but we aren’t fools for enjoying it while it lasts. Praise God from whom all blessings flow!