Today we are on the cusp of a holiday designated toward thanksgiving. I have no idea how eating ourselves into oblivion is the best way to give thanks. I do know we’ve been told stories since grade school that the pilgrims and Indians shared a meal one day to show their friendship. And the Indians taught the ignorant pilgrims how to plant corn…blah, blah, blah. That’s all I really remember. The blahs are just the rest of what the teacher probably said that I didn’t retain in my slowly leaking memory bank.

I’m sure for that day and age it was quite a feast, although without black olives, can-shaped cranberry sauce, and Marie Calendar pie, I’m not sure how they survived.

I think the Indians brought the turkeys, shot through nicely with an arrow, cause nobody likes to pick buckshot out of their teeth. The pilgrims probably brought some hasty pudding or whatever weird stuff they ate in Europe. Maybe a big pan of kippers with their eyeballs still attached. What ever they had, they gave thanks. They were grateful for the opportunity that this country opened up to them: the beauty, the bounty, and the freedom to pursue happiness, prosperity, and their own personal religious beliefs without fear of government intervention or persecution.

From the pictures I’ve seen – paintings really, since they apparently didn’t have digital camera technology yet –it was obviously a lovely day. They may have been having a touch of global warming just as we are. There was no snow or rain. The sun shone brightly, glinting off colorful pheasant feathers in the Indian’s headdresses, and warming the pale, pasty-faced pilgrims in their black and white well-starched outfits. In fact, those hats and bonnets could rival the flying nun’s habit and then some. 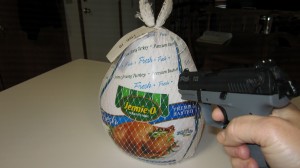 I went to the store to buy my turkey today. I didn’t have a bow and arrow handy, so I succumbed to the flock mentality and dug through the freezer section at Cub. Strangely enough, almost all of the turkeys were 16 pounds. I was amazed by this phenomena because the last time I was at JC Penny’s, nearly all of the clothes left on the racks were also size 16. Coincidence? I think not. I haven’t figured out what it means exactly, but there must be a government conspiracy here somewhere.

So with two turkeys in my cart, olives, sweet potatoes, and those yummy made-from-scratch, found in a tube in the refrigerator section, croissants, I checked out of there with my Thanksgiving dinner nearly intact. I still have to mix up some dressing to stuff that bird with, cause you can’t have a turkey without dressing. It’s the American way. But no matter if it is a historical day of thanksgiving, I’m not stuffing it with kippers and hasty pudding!

ps. Out of thankfulness to my faithful readers and fans, the 1st book in my new young adult series, “CHOSEN,” is FREE on kindle, Wed-fri, November 21-23rd! Get yours here !