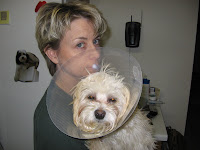 After a couple of mild, melting winter afternoons, the freezing fingers of death have returned. I went to the store today and nearly died before I could load the groceries in my trunk, shove the cart in the nearest snow bank, and jump back in the car.

Yes, I am one of those people that sometimes doesn’t return my cart to a designated corral. Not because I’m lazy, mind you, but because I can’t find one! If you have to walk further to put the cart away than you did filling it up in the store, the corrals are too doggone far apart.

Today is Groundhog Day, and of course that fat little rodent came out of his house and announced, through the telepathic powers of an old man in a top hat, that there would definitely be six more weeks of winter.

I was not surprised by this event. I was surprised at the time limit. Six weeks sounds a lot shorter than I’m expecting. But I guess Phil the Groundhog is just about as reliable as our own local weathercasters.

I took Willow (puppy) in today to be Spade. The Webster’s dictionary says spay means to 1. Cut with the sword (or) 2. To sterilize by removing the ovaries. Either definition sounds painful. She came along in the car, innocent and fluffy, oblivious to our true destination and probably hoping for a stop at the DQ. She was sadly disappointed. The Vet is not a “good smell” place.

My dogs usually try to pull in the opposite direction when I tug them through the door. They aren’t interested in the free treats or stepping on the scale to see how big they’ve grown. They just want out of there as quickly as possible. I don’t blame them. I feel the same way about the dentist.

If you have a Humane Society calendar like I do, you probably know that February 24th is national Spay day. Until they sent me this free calendar because they no doubt believed me to be a very humane sort of person, I did not know that there even was a holiday for Spaying. Are dogs supposed to celebrate this? In the same month that humans get heart-shaped cards and chocolates, puppies get surgery and a plastic cone around their head. Doesn’t seem fair. But there you have it, National Spay day in black and white.

I know I took Willow a little early, but I thought given that every dog in the neighborhood would want to get spade on the 24th, I thought I’d beat the rush. So, I have to pick the little evil one up in about an hour. Hopefully, she won’t hold a grudge. I do have leather couches and she does have very sharp teeth. Maybe if I share my chocolate.